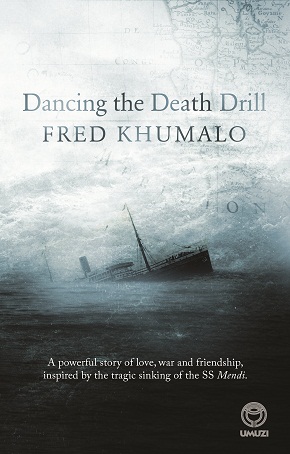 The SS Mendi which sank off the Isle of Wight 100 years ago in February 1917 is finally getting the attention it deserves. But not enough. More than 600 black South African soldiers from the Native Labour Contingent as they were called, died, when it was rammed in thick mist by the much bigger vessel, the SS Darro. In the event the captain, Henry Winchester Stump, was suspended for a year for his part in the tragedy because he “took no steps to save life”, according to the enquiry.  An act of bravery that has echoed down the years was that of Reverend Isaac Wauchope , who, while the SS Mendi was sinking deeper and deeper,  exhorted the soldiers to be brave while “dancing the death drill”. The uniform explosion of the soldiers’ feet sounding a tattoo on the deck, in time with the loud chant, “Aji, Aji, Aji. Brothers we are dancing the death drill; we are prepared to die”.

Now Khumalo has turned the sinking of the SS Mendi into a novel featuring the fictional Pitso Motaung who was one of the survivors on that ill-fated journey. Pitso is the son of Cornelius de la Rey, a Boer War hero and talented artist, who deserted, not because he was a coward, and found himself at a small village on the banks of the Caledon where he met and fell in love with Matshiliso Motaung,  chief Ntate’s daughter.  De la Rey and Matshiliso fled the village when she became pregnant and they landed up in Bloemfontein with an Indian family, the Saloojees, where Pitso was born. One day De la Rey borrowed some money from the Saloojees to go to town to buy medication and clothing for the baby. That was the last time anyone saw him and Pitso and his mother were left to fend for themselves. Pitso was on his own when his mother died in an asylum after she gave birth to a baby girl, who died at the age of two which sent Pitso in to a deep depression. When Pitso was in his teens mixed race people in Bloemfontein had come out of the woodwork and they were trained in carpentry, farming, blacksmithing and other trades at a centre to allow them to become independent adults. It is also where he found music and Madame Christine Clinquemeur, who took a great liking to the big and talented PItso which ended in heartbreak for the young man. That in short was Pitso’s life until he found himself on board the SS Mendi sailing to Europe to fight for Crown and Country against the Kaiser during World War I. Pitso’s life is transformed when he falls in love with a nurse, Marie-Therese, who cares for him at the Dieppe hospital after he broke an ankle and dislocated a kneecap during the SS Mendi disaster. They get married and PItso known as Jean-Jacques Henri, after getting a new identity, worked himself up from general dogsbody to head waiter at the Tour d’ Argent restaurant where he is now head waiter and just eight months from retirement. Jean-Jacques has always kept his South African background secret, preferring to pass himself off as an Algerian who fled to France during the Algerian War of Independence. However, he is still fluent in Afrikaans. One lunchtime two men arrive and Jean-Jacques overhears them talking in Afrikaans when an altercation ensues and he stabs them both to death.  He is arrested and goes without a fuss with the gendarmes to prison. Meanwhile Thierry Bousquet, a well-known crime reporter wants to know more about Jean-Jacques and seeks the help of artist and musician, Jerry Moloto, a South African living in Paris. Moloto who befriended the SS Mendi survivor tells Bousquet all about Jean-Jacques’s life. It is a work of historical fiction, but with many facts to back it up, including extracts from the enquiry, which with its many long, official quotes hampered the flow of story. A bombastic white man (and Captain Stump) is really the villain of the piece. Dancing the Death Drill is a moving story, and you can tell that Khumalo has put his heart and soul in to it.  Even though it is fiction Dancing the Death Drill is a worthy addition to the little known narrative of the SS Mendi. It is well written and you will find it hard to put down. It would make a dramatic movie.