The popular radio drama and stage production, DIE REBELLIE VAN LAFRAS VERWEY, written by award-winning author Chris Barnard will come to life on the big screen from this coming Friday, 7 April 2017 with renowned actor, Tobie Cronjé, in the lead role. 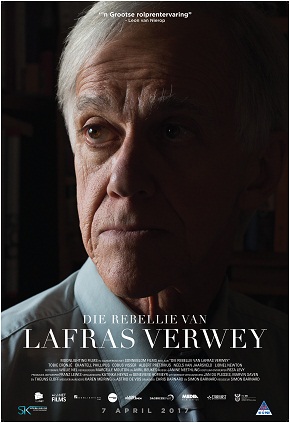 Tickets can be booked from Wednesday, 5 April 2017 at www.sterkinekor.com or www.numetro.co.za

This tragic comedy is based on a 1971 drama – a combined effort written and adapted into a contemporary script by the late writer and his son, Simon Barnard. It tells the story of Lafras Verwey, an outcast who could never accept the realities of life. Although he is a government official, he hears the sound of otherworldly music playing in his ears and dreams of a wonderful future. He considers himself a key player in the preparation of a significant rebellion that he believes would change the world. When he takes Petra (Chantell Phillipus), a young pregnant woman, in to live with him, the rebellion becomes even more important to him. Ironically enough, his dreamt-up revolution starts the very night that the baby is born. Comedy, drama and elements of fantasy are all intertwined in this gripping tale of a man who is willing to risk everything in his pursuit to make the world a better place for all.

DIE REBELLIE OF LAFRAS VERWEY is produced by acclaimed actress and director, Katinka Heyns and Genevieve Hofmeyr, under direction of up-and-coming film maker, Simon Barnard. He also makes his debut as director of a full-length feature film with this compelling story.

Other renowned actors such as Neels van Jaarsveld, Chantell Phillipus, Cobus Visser, Lionel Newton and Albert Pretorius also star in this drama, which will be released by Ster Kinekor Entertainment on 7 April 2017.