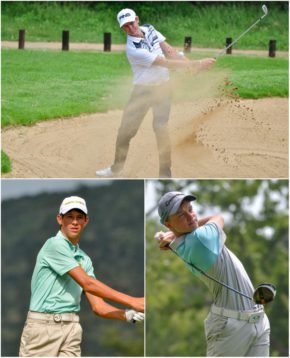 Nienaber won the SA Boys U-15 and U-17 titles and the 16-year-old from Bloemfontein put himself in strong position to challenge for a third Nomads SA Boys title with a four-under-par 68. He took the lead at nine-under, but overnight leader Christo Lamprecht from Southern Cape and Jayden Schaper from Ekurhuleni made it a party of three at Langebaan Golf and Sports Club.

Reigning Sanlam SA Amateur champion Lamprecht clung to a share of pole position with a 69, while Schaper – who won the SA Boys U-13 and U-15 titles – threw his name in the hat with a 67.

The 36-hole cut to the top 64 and ties was set at nine over, leaving 67 players in the field that will contest the third and final rounds on Wednesday to earn a coveted spot in the 32-man line-up that will challenge for the Match Play Championship title.

Nienaber, Lamprecht and Schaper will start the third round with a two shot cushion over Luke Mayo from KwaZulu-Natal and Southern Cape’s Martin Vorster, the reigning Nomads SA Boys U-17 champion, who posted respective rounds of 67 and 69.

However, trouble could lurk just behind the duo in second.

Western Province’s Deon Germishuys carded a 68 and Ruan Groenewald from Mpumalanga shot 67 to finish four shots off the pace. And it gets worse for the leading trio with Luca Filippi and Garrick Higgo sitting a further shot adrift in joint eighth with Werner Deyzel from Gauteng North, who returned a second round 69.

Last year, an eagle finish in the third round propelled Germishuys into contention and the Strand golfer closed with a 70 to win the Stroke Play Qualifier at Bloemfontein Golf Club.

Filippi from Western Province won the Individual Boys Competition at the All-Africa Junior Golf Championship by 12 shots, while South Africa’s top ranked Higgo from Boland fired a blistering final round 65 to tie the amateur record at Royal Harare Golf Club.

Higgo carded a 69 and Filippi produced a flawless 67 that featured an eagle three at the final hole to finish within striking distance of the leaders. With Filippi in threatening form over the last six weeks and Higgo bent on revenge after losing last year’s final to Ross Sinclair, they will have a point to prove and if this pair catch fire early on Wednesday, the 36-hole pacesetters will definitely have a fight on their hands.