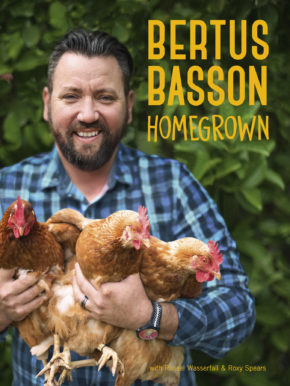 Bertus Basson is not just a pretty face on the reality TV show, the Ultimate Braaimaster, hosted by Justin Bonello.  Basson is a hard-working chef with four restaurants including the award-winning Overture in Stellenbosh. You would think that a chef of Basson’s stature would have numerous cookbooks to his credit. But Homegrown is his first one.  And he has included one or two classics from Overture between the pages.  Basson says Homegrown is about the memories he has made on his culinary journey,  inclding his mother’s melktert recipe which inspired one of the most popular desserts at Overture.  One of the reasons he has resisted doing a book until is, he says, is because once the recipes are on the pages they are “frozen forever”. But he likes experimenting and trying to improve on them, so they are never the same.

The chapters are Childhood, My Hood, Ingredients and Home.  Which speak for themselves. Childhood has recipes for Draai Roomys, Peppermint Crisp Delight and a Kos Kos Salad, the star of the show being the humble pilchard; Pickled Sardines or Mia se Pampoentert, are also worth trying. The Gatsby, a Cape icon, gets a tasty twist: the  Gourmay Gatsby. Mealies also get the Basson treatment when they’re slathered with a dukkah mayo. The humble boerie roll also becomes a masterpiece at Basson’s hands, which he calls the Banana Republic Boerie: some of the ingredients are banana, bacon and garlic, which was one of the dishes in an episode of the Ultimate Braaimaster. A South African cookbook would be incomplete without a recipe for biltong. Basson has included his for Soft-Cured Biltong, which served with pickled celeriac, shaved romanesco, garden greens, anchovies and olives has become a popular dish at his restaurant. Meat dishes include recipes for pork, lamb and venison, among others. A braai is not always just a braai. There’s also shisanyama which means ‘burn meat’.  Mzoli’s in Khayelitsha which is a magnet for tourists, is a good example, but the best shisanyamas are those that spring up on the corners of the dusty township roads where you can enjoy a freshly slaughtered chicken on the grill or even a piece of brisket.

Don’t think that the dishes in Homegrown are just for the sophisticated palate: there are recipes for vetkoek; Chip ‘n Dip using aubergines, and Koeksister Ice Cream. Homegrown is not just about recipes, it’s also about culinary memories, and you’ll find plenty to tempt your palate.  The recipes are not difficult to follow and are made with home grown, fresh ingredients that are  easily available. Wasserfal is a highly regarded food writer and photographer who has worked on or produced 200 cookbooks. Spears specialises in graphic design for food and restaurant branding, recipe books, packaging and food truck design.