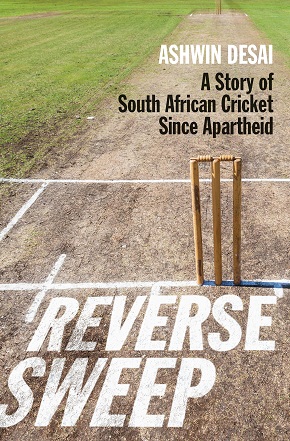 Ashwin Desai has bowled a nasty bouncer to the cricketing fraternity, old and new, with his book subtitled, A Story of South African Cricket Since Apartheid.  Desai is a Professor of Sociology at the University of Johannesburg and has written several books on cricket . He plays the game, and has done so ever since he donned the whites at the Springfield grounds in Durban, now home to a sprawling industrial complex that has wiped out the memory of that field where six or seven games would be going on simultaneously, mainly on badly crusted and musty mats that were dragged out of a wood and iron shed. Boundaries were marked by piles of misshapen stones and you could easily break an ankle when you were running to score a single.

Not a lot has changed about cricket today, except for the suits who run the game, which despite the advent of democracy 22 years ago, is closed to people who play their cricket in the townships. Exceptional talent usually going to waste not only through lack of opportunity, but because the suits keep the doors (and their minds closed). And in post-Apartheid South Africa the politicians have failed to develop cricket. The ANC government, former Sports Minister(Mr Razzamaz) Fikile Mbalula, now Minister of Police, have for the most part ignored black cricket at grass roots level.  There are a lucky few, though, like the talented Temba Bavuma who scored 203 runs in his debut for the Proteas, had most of his formal training at top private schools. Now Mbalula has been “promoted” I  wonder if his ban on the hosting of international tournaments until transformation standards have been met, will still be enforced. To think that the ban would make a difference is a pipe dream. Not when the Proteas are still so white, despite the inclusion of Hashim Amla and a few others. At least, that’s my opinion.

Desai examines all aspects of the game from the rogue tours which were organised by the white South African Cricket Union between 1985 and 1987 and some of the world’s top cricketers like Geoff Boycott, Mike Gatting, Lawrence Rowe, and others happily joined the tours to make a quick buck. The justification that the tours would benefit development teams in the townships was just so much hogwash.  And the reporting by the journalists on tour, particularly Australian reporter, Chris Harte, who had a really good time: a travelogue of game parks and beer drinking, painted a one-sided view of the country. After an interview with Thomas, the black supervisor of the outdoor event at Highgate Ostrich Farm, Harte came to the conclusion that black people didn’t want the vote, and that cricket wasn’t their beat. Luke Alfred, once one of South Africa’s leading sports journalists is also skewered under Desai’s microscope, especially for his book, Testing Times (2003), and his selective memory.

Desai also minutely dissects Hansie Cronje’s corrupted innings and looks at Kepler Wessels who deserted South Africa to play for Australia then captained the Proteas when the country emerged in to the sunlight.

And those we thought were heroes turned out to be zeroes, like Ali Bacher, who was administrator of the newly formed United Cricket Board of South Africa. Put simply Bacher was an astute politician who knew how to play the game for his own ends and so he not only managed to survive post-apartheid but he flourished through his contacts in high places. One of them being the late Minister of Sport and Recreation, Steve Tshwete. “But then everything that Bacher does is dressed up in hero’s language,” writes Desai. Others that come in for criticism include celebrated wicket keeper Mark Boucher, who “didn’t seem to understand the privileges his white skin gave him”. The last chapter, “Batting in Uncertain Times” is telling and Desai’s analysis of the future of cricket should give many people pause for thought. However, the suits that should read Reverse Sweep probably won’t because ‘the truth hurts’, as they say in the classics.

Desai was a member of Cricket South Africa’s transformation structures so he knows what he is talking about.  The book is required reading for everyone, even if they only have a passing interest in “the gentleman’s game”. The suits who run cricket should read it carefully and take to heart the lessons Desai imparts.