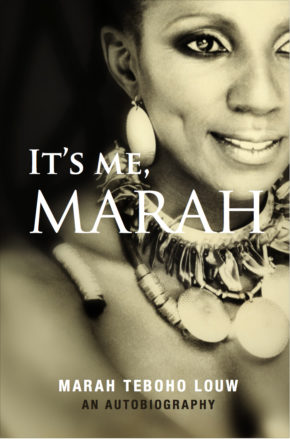 The public persona that we show the world is not always who we are. And so it is with celebrities like Marah Louw, who after a long search found out who she really was at the age of 44 when a family secret exploded into the open. Louw who is well known as a singer, actress and a judge on Idols tells all in this no-holds barred autobiography.

And if you’re expecting to reveal who spiked her Red Bull drink with Vodka while she was judging an Idols show and as a result was fired because she was drunk. You’re in for a surprise. In fact she glosses over the incident, even though talk show host Gareth Cliff, one of the other judges, admitted as much in the Sunday Times,  soon after the book was launched.

Louw was born in Soweto and had major roles in musicals including Sikhalo written directed by Gibson Kente in the 60s; and Meropa which toured Japan in 1973. In fact it was only when she was already in Tokyo that she wrote to her father to apologise for the deceit and tell him where she was and when he accepted her apology and wished her luck in her showbusiness career, she was elated. Louw also starred in King Kong, Nkosi Sikeleli Afrika and Babe Come Duze. She also “discovered” Lebo M, the South African composer and of the Lion King fame when he first appeared illegally in the popular Pelican nightclub owned by Lucky Michaels in Soweto.

She was brought up by Mokgethi Benjamin Louw and Charlotte Masindi Louw, thinking that they were her parents. But after her heart-breaking search which led her to Boomplaats, a village in the Eastern Cape, she learned that they were in fact her grandparents while Trueblue, who she always regarded as her sister was her mother. Trueblue died in Baragwanath Hospital after her partner David poured petrol over her and set it alight, claiming that it was caused by a paraffin stove. Louw was determined to find the truth. And she did.

Louw had a string of relationships , though not always with right people. One of them was musician Thapelo Mofokeng, and one of the cast members, he however, abused her, and she kept going back until she finally woke up to his philandering and abusive ways. She was married to Billy Thompson from Scotland for 19 years until they divorced in 2004. She relates with some wit how Thompson had to negotiate Lobola with her relatives. They were married when the Group Areas Act was still in force and had to use subterfuge to rent their first house in Norwood, Johannesburg. It raised a few eyebrows but Louw wasn’t about to take nonsense from anyone and she let her nosy neighbours know what she thought in no uncertain terms. There were some humorous incidents. Among them when a  group of domestic workers mistook her for the maid when they saw her working in the garden. Louw was also aboard the ill-fated Oceanos when it sunk, when she was working as an entertainer, along with Alvon Collison and MC Robin Bolton. She recalls clearly how the Captain saved his family first, leaving the passengers on their own.

The entertainer broke racial barriers at home and overseas. She has performed at concerts for Nelson Mandela, at his inauguration and at some of his birthday parties. In fact, she says, it was on a stage with her that Mandela showcased his famous “Madiba Jive”. Louw has a daughter Moratuoa who it appears is following in her famous mother’s footsteps.

The fact that Louw’s biological father Simanca refuses to tell her the truth about his relationship with Trueblue still rankles.

It’s Me, Marah, is an entertaining and well written autobiography, with touches of humour and sadness. It’s well worth reading. All that’s missing is an index and a glossary. There are 16 pages of historic images in colour and black and white.