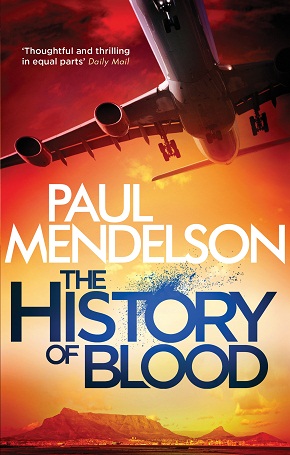 South Africa is a fertile bed for crime writers. What with drug and rhino horn smugglers, people trafficking and mafia type gangsters, it provides plenty of ammunition for Paul Mendelson in The History of Blood, his third book featuring maverick, Colonel Vaughn de Vries of the Special Crimes Unit. It’s an elite force that is barely tolerated by the top brass of the South African Police Service, not least because it is staffed by the so-called relics of the apartheid era, like De Vries and his boss, Director Henrik du Toit, who plays the game by the rules and is still trying to right the wrongs wrought by the apartheid-era police. are the other two. And though The History of Blood can be read as a stand-alone it’s a good idea to read the First Rule of Survival and The Serpentine Road, as many of the characters feature again.

In The History of Blood the focus is on young and poor white girls, with no future, who are coerced into smuggling drugs in to Thailand. However, the story is much wider than that and when De Vries is called to investigate the so-called suicide of Chantel Adam, a Cape Town resident, known as the Mountain Girl, who made it in America as a model, after an ad for  a chocolate bar made her famous. But she hit rock bottom and came home, only to die in a seedy motel, near the airport. When De Vries responds to the call he recognises her, not only as the daughter of a prominent-apartheid era politician, Charles Adam who adopted her after his brother Willem was murdered, but as a friend of his two daughters, Lulu and Kate.

But De Vries also gets involved with Warrant Office Lee-Ann Heyns who is seconded to the unit from the leafy suburb of Rondebosch. She has also been side-lined because of her colour; she is impulsive and determined to prove her worth with dire consequences.

During the autopsy they find a message from Chantel which sends De Vries and his colleagues on a chase across the country and beyond to Zanzibar to find the truth behind her “suicide”. And to stop the gang from recruiting other young white girls to their cause.  Meanwhile De Vries’s old friend, British undercover agent living in Cape Town, gets the dreaded news of his long-missing wife and daughter. The History of Blood has more twists and turns than a serpentine road (pun) intended and the trail takes De Vries and his colleagues including Warrant Officer Don February in to the darkest corners of South Africa’s past. The story has its genesis in the old South African defence force, where conscripts were forced to do unspeakable things. At the same time, thanks to a PI who has been hired by Charles Adams to keep an eye on his daughter, De Vries unmasks the killer of Willem Fourie Adam, one of the founders of the National Party group who lobbied for a peaceful settlement.  The explosive climax takes place in Zanzibar. The History of Blood is a top-drawer thriller as topical as today’s headlines. It’s written in a racy staccato style that will hold you from page 1.