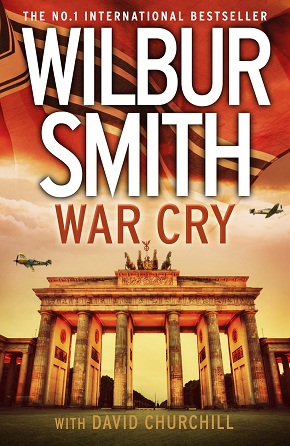 Wilbur Smith made his name when he wrote When the Feeds in 1964, the first in the saga of the Courtney family and he has been on the best-seller lists ever since. There have been 14 books in the series and this one continues where Assegai (2009) left off.  In Assegai ladies’ man Leon Courtney, who served in the King’s African Rifles as a lieutenant, becomes a professional safari guide and big game hunter in Kenya, in the years before the First World War. Courtney’s uncle Brigadier Penrod Ballantyne, who commands the British Forces in East Africa, asks him to spy on one of his clients, German industrialist Otto von Meerbach who is on safari with his mistress, Eva, with whom Courtney begins an affair. Von Meerbach and Eva both have secrets which are unmasked in Assegai. Fast forward to War Cry and Courtney is now happily married to Eva and they have a child, Saffron, who is the focus of the book. When Eva dies giving birth to their second child on Lusima, their sprawling Kenya estate, Courtney and the young Saffron are devastated. Nonetheless she has an idyllic childhood, beats the boys at their own game including horse riding and shooting. She goes to a top girls’ school in Johannesburg but her sights are set on bigger things, one of them taking over the Courtney empire and she heads off to Oxford. Now a beautiful young woman, she makes friends with a  German girl, Chessi von Schondorf, which serendipitously leads to the Von Meerbach family. Saffron falls in love with Gerhard von Meerbach, a promising architectural student who is blackmailed by his brother Konrad, the brutal head of the Von Meerbach dynasty, and Reinhard Heydrich to become a Nazi, because of his friendship with the Jewish lawyer, Isidore Solomons. Lurking in the background is the mysterious Mr Brown who is linked to Britain’s Special Operations Executive and is keeping a watching brief on Saffron, and he wants her for a bigger mission. Meanwhile the Courtneys’ business in Cairo is facing hard times and Leon has a rescue plan in mind, which doesn’t find favour with his brother, Francis who was badly injured in World War I, although he never saw any real action. Basically he was a Quartermaster. Francis is an ardent admirer of the fascist Oswald Mosley and a closet Nazi sympathiser. Leon is asked to use one of the company’s ships, the Star of Khartoum, to transfer a load of Greek bullion from Athens to England for safekeeping. Saffron becomes a driver for Major General Henry Maitland “Jumbo” Wilson, General Officer Commanding the British and Empire troops in Egypt. Then Hitler invaded Poland which signalled the start of World War II. The action goes from places as remote as a Masai village on the  outskirts of Lusima to places as posh as the Ritz in London, as exotic as the ski paradise of St Moritz, where Saffron takes on the men only Cresta run, just to show that she can. And as horrific as the site of the Babi Yar massacre. Smith is at his best when writing about what he knows, Africa, and War Cry, is real page turner. However, the language is often old-fashioned but not out of keeping with the narrative’s era. Smith’s sex scenes though are at best pedestrian, and could do with livening up. War Cry ends with Saffron back home where she visits Mama Lusima, the ancient seer and the mother of Leon’s blood brother Manyoro and Saffron’s de facto uncle. Mama Lusima makes a prophesy which Saffron is determined to fulfil. Which means that there is another instalment of the Courtney saga in the offing. War Cry is a well-plotted story with cameo appearances of the characters of the day, among them Hitler and some of his henchmen; Mosley and his Black Shirts; his mistress Diana Guinness and Hassan Al Banna, the founder of the Muslim Brotherhood. Smith fans will enjoy War Cry which was written with David Churchill, the author of The Leopards of Normandy, the trilogy of novels about the life and times of William the Conqueror.