Making his fourth straight appearance at the Valero Texas Open, Branden Grace opened his week with a 6-under-par 33-33=66 to claim the early title of clubhouse leader as the afternoon wave gets their day started. 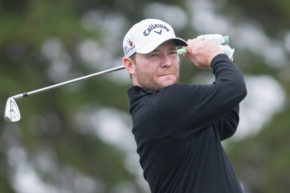 Grace gave a tee-to-green clinic today, missing just one (of 14) fairways on his way toward 14 greens in regulation. The highlight came at the par-4 10th where he stuck his 152-yard approach to inside three feet, but it was really a steady stream of great approach shots. The South African gave himself 14 birdie looks from inside 20 feet, including every hole on his homeward nine. Grace walked off the course gaining 7.432 strokes tee-to-green. The third-highest ranked golfer in the field (World No. 21) really showed his ball-striking potential today. He’ll be even tougher to catch if his flat stick heats up as the week progresses, losing 1.758 strokes putting today.