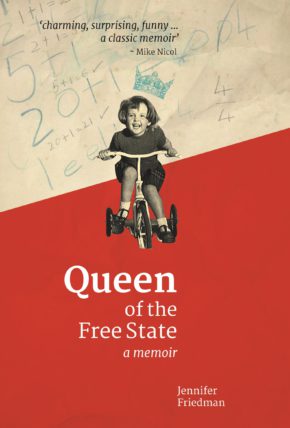 Growing up in a platteland town can be fun. It can also be fraught with misery. Especially if you’re Jewish and don’t quite fit in. It’s even harder when your parents are strict disciplinarians and Pa has a very short temper, is abusive, verbally and physically.

Friedman writes about growing up in the then Orange Free State in the 50s and 60s when Hendrik Verwoerd’s grand apartheid dream was slowly taking shape but dividing South Africa. However, Friedman doesn’t spell out where she went to school. She doesn’t name her two sisters and she always refers to her parents as Ma and Pa.

When the Sharpeville massacre occurred, many people, including the Friedmans, thought of packing for Perth or Canada, and Friedman remembers clearly the day her Pa took photographs of the family for their passports, just in case.

Friedman’s grandparents had a farm, Boesmansfontein near Philippolis, where she spent many happy hours. “Boesmansfontein makes a fist of happiness in the place under the V of my ribs,” she writes.

Another regular haunt was the cemetery at Philippolis and there is an image of her “favourite” tombstone. She tells her granny she visited the cemetery. “Everyone all right there, dear?,” granny asks. “Oh yes, granny, everyone’s fine,” Friedman replies. It is typical of the understated humour, amidst the pathos, that permeates the pages of Queen of the Free State.

Friedman felt the perniciousness of anti-Semitism when her friends called her a “bladdyjew” and told her the “Jews killed Jesus Christ”, while an unsympathetic Ma tells her five-year-old daughter she is big enough to fight her own battles.

Although Friedman faced many hurdles it seems her childhood was a relatively happy one even though she battled to find a place in the world she lived in. Her natural rebelliousness was anathema to her parents. The hairbrush came out often and her father did use his fists in anger.

She writes fondly of Marta, the domestic, who cleaned and cooked and carried Friedman – dubbed Mpho (Gift From God) on her back; of Isak, the gardener, and Sandy-my-dog, and her description of when he died will leave a lump in your throat. It’s one of the few times that Ma showed a more feeling side of her personality and she surprised her daughter with a Sandy look-alike. Friedman had her first taste of real freedom when their neighbour, Uncle Michael, bought a glider and introduced her to the joys of flying.

Some of Friedman’s anecdotes will make you chuckle out loud or shed a silent tear. You’ll laugh when she recalls buying her first tiettiesak (bra); you will feel her pain as she describes her initiation at high school, knowing that her father, the town’s pharmacist, supplied the boys with the cure-all, Duiwelsdrek, and they forced her to drink it; another humiliating experience was at a Habonim camp for Jewish kids, the first one she ever attended. The other children refuse to believe she’s Jewish. At the camp she first learned about the Holocaust when she watched a gruelling documentary.

She recounts her experiences at Eisteddfod where her parents expected nothing but gold medals.

Then her life changes forever when the postman arrives at her door with a telegram. Remember them? It brings news that Friedman has been accepted as a boarder at a posh girls’ school in Cape Town which was a nightmare experience.

And despite promises to Marta, Isak and Sara, the “new domestic”, and Sandy-my-dog (the second), she never went back to her Orange Free State home. However, 26 years later in 1992, before immigrating to Australia, she went back with her new family but “nothing seemed right”.

Queen of the Free State is a beautifully written and finely crafted memoir, consisting of short stories that tie in neatly. The language is lyrical and evocative: you can smell the grass; feel the mist in the trees and hear the Christmas beetles as they thud against the windows.

You don’t have to be Jewish to enjoy Queen of the Free State. It will resonate with many people, especially those who lived in the platteland. There are eight pages of historic images and a glossary. Friedman who is well known for her Afrikaans poetry which has been widely published, now lives in Australia. She has her own plane. She flies it through vast and foreign skies. “But I’m in the air, and I am free.”

Friedman is writing a follow-up to Queen of the Free State. I hope it doesn’t take too long.