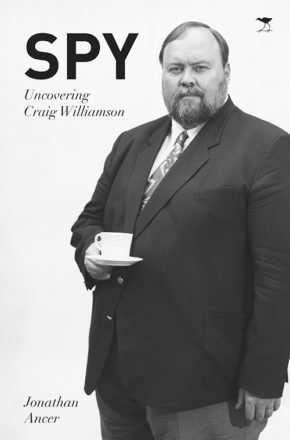 In his foreword Ancer points out that it is as important to remember the Struggle’s killers as well as its victims. If we forget what they did, they escape accountability for their actions.

In my opinion though, people like Craig Williamson are hard-wired to act the way they do: they betray people or murder them without compunction. So I’m not sure how Williamson has been held accountable, except Ancer shows how evil he is. When the spy appeared before the Truth and Reconciliation Commission (TRC) he didn’t show much remorse but nevertheless was granted amnesty.  He also told the TRC that his Special Branch unit was responsible for the parcel bomb that killed Ruth First in Mozambique and Jeanette Schoon in Angola , along with Katryn, her young daughter. Schoon’s son was a toddler at the time, and although he was uninjured, he was traumatised and still bears the mental scars today. And Williamson’s justification for this dreadful deed? “First and Schoon were operatives and knew the threat.” And when Ancer asked Williamson about Katryn, he gave the same answer as he did to the TRC. He didn’t know the child was there and blamed her father, Marius, for putting his daughter at risk.  Although he did say that news of the little girl’s death had been “like a bucket of water thrown in my face”.

After matriculating from St John’s College in 1968, Williamson joined the police instead of the South African Defence Force for his obligatory conscription. After he was asked to join the Special Branch (SB), the spy weaselled his way into the student movement, Nusas, at Wits, where the SB paid his university fees and a salary. He was elected vice-president of Nusas  in 1975 because he had good organisational skills and could do the books. Students suspected Williamson of being a spy but they had no hard evidence. Although, as Ancer points out, four out the 16 SRC representatives, including Williamson, were agents. Williamson infiltrated various anti-apartheid organisations, among them the International  University Exchange Fund (IUEF) based in Geneva, where he was introduced to ranking ANC officials; he also wormed his way in to the ANC in London and associated with Mac Maharaj and Ronnie Kasrils. However, when a Bureau of State Security (BOSS) agent who knew Williamson, defected to London, his cover was blown and the spy returned to South Africa. He was often brought out to interrogate former university “friends” among them Duncan Innes and Andrew Boraine, both Nusas presidents back in the day. Williamson also testified against Barbara Hogan and Renfrew Christie, in their trials.

When Ancer comes face to face with Williamson he asks him how he would like to be remembered.”Pah,” he spits, “I’m not one for monuments. I prefer to be undercover; the eminence grise.” Ancer writes that after three years of thinking Williamson, he’s left with a hollow feeling and not much understanding of why the spy did the loathsome things he did.

Spy. Uncovering Craig Williamson, is required reading for anyone interested in the really dark side of apartheid and is an important addition to the history of South Africa. It is well-written and well-researched and deals with, as the jacket says, justice, betrayal, accountability and forgiveness. Sadly though it seems Williamson doesn’t believe in accountability, and I don’t think too many people have forgiven him for what he did. Nor does he seem to have any regrets: “Regrets come with hindsight. We all have 100 per cent hindsight, but when you’re in the battle there isn’t time for reflection and consideration”… “It was a game that started off innocently but ended roughly.” Perhaps it was just a game to Williamson, but one with dreadful consequences.