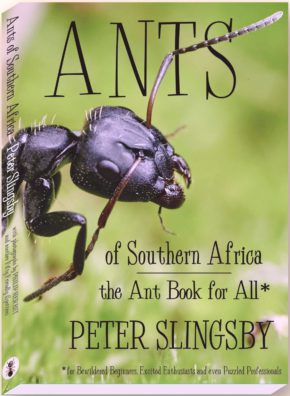 The Ant Book for All

If you’re like me you probably don’t give ants much thought, except when you see the little black ones streaming in to the bag of sugar,  “enjoying” the food in the cat’s bowl (they like Whiskas, it seems),  or spotting small circles of sand on the paving where they’ve been excavating nests. It’s quite difficult to get rid of them. You can use as much baby powder or Epsom Salts (old wives’ tales) or as much insecticide as you want, it won’t help: they always return after a couple of months. That’s because ants globally outnumber us by uncountable trillions, writes Peter Slingsby, in this book about ants *for bewildered beginners, excited enthusiasts and even puzzled professionals*, as the tagline on the cover says. Slingsby deprecatingly calls his book a citizen’s field guide to local ants. But it is much than that. The 256-page book is printed on high quality art paper covering 600+ species with maps showing where many of them can be found, 350 colour images of live ants, not those skewered to a collector’s board, and 100 full colour sketches by Slingsby, who has been interested in ants since he was a boy. It’s the second guide he has published. The first one was a small black and white booklet he put together in 1991 called Ants of the Western Cape: Eco field guide 1. The pre-eminent guide at the time was the Study of Ants by renowned entomologist and the founder of WESSA (Wildlife Society of SA), Sydney Skaife, which he published in 1961 about southern African ants. That’s when the then 15-year-old Slingsby’s interest in ants was sparked, and he annoyed his family with colonies of ants in plaster nests on ant tables. Later he donated the colonies to Skaife and visited him at his Tierbos laboratory above the mountains of Hout Bay, several times.

Ants is a fascinating look at ants and many of them have the most intriguing names: Karoo balbyter;  Northern Hairy Sugar ant; Twotone Restless Ant; Furry Cautious Ant; Frida’s Pharaoh Ant; Bearded Hotrod Ant; Irritating House Ant; Big-eyed Fierce Ant; Bigjaw Razor Ant; False Trapdoor Ant, to name a few, and  all of them have brothers and sisters, with different names. Then there’s the Matebele Ant which preys on termites, conducting raids only at dawn and dusk. They advance in double file columns (much like Matebele warriors). They have a very painful sting and emit a foul odour when they are disturbed.  It is often spelled Matabele, which, says Slingsby is incorrect, and is the colonial spelling.

That’s just one of the interesting facts about one ant. And here’s another one about Bothroponera cariosa or the Strandveld Rugged Ringbum Ant which is found in the strandveld on the West Coast or in the Steenberg mountains. Cariosa means crumbly or porous.

The Ants of Southern Africa tells you everything you wanted to know about ants but were afraid to ask. The images: 100 of them out of 225 by Philip Herbst, a Stellenbosch University cardiologist, Wynand Uys and 50 iSpotters are astounding. Ants is an accessible guide, free of scientific jargon, apart from the Latin names, and is easy to read. There are more than 1 000 species of ants in southern Africa, from minute to the size of a finger nail. You’ll learn all there is to know about the commonest species that are all around you. You’ll spend hours paging through it and you’ll stop treating ants with disrespect.  The book is a must for anyone interested in the natural world. Slingsby who is a well-known cartographer drew many of the ants he studied and used the drawings to make unusual wrapping  paper which you can also order.