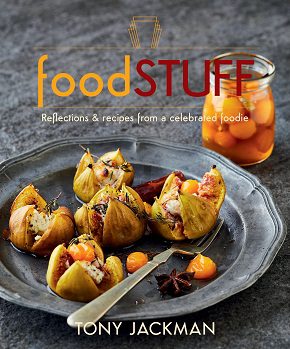 Jackman has many strings to his bow. He’s a playwright, author, chief sub-editor of the online Daily Maverick,  he used to write a column, Sliced and Diced for the Weekend Argus and owned a bistro in Cradock, which attracted an assortment of the weird and the wonderful, among them two visitors from Orania, which had unintended consequences. Now he lives in Grahamstown with his journalist wife, Diane Cassere.

In this cook book subtitled, Reflections and recipes from a celebrated foodie, he reminisces about his life and how fate, rather a recruitment ad from De Beers Consolidated Diamond Mines, brought him and his Yorkshire family to South Africa – where they settled in Oranjemund at the mouth of the Orange River.

The stories reflect Jackman’s nomadic life: some are humorous, some are about life in general and the saddest chapter of all is when he writes about the death of his son Nic at the age of 19 in January 11 1992.

The chapters with several sub-headings are Reflecting on the Past; Reflecting on My Life and Reflecting on the Now and Beyond, and they all include recipes, each one sounding more tempting than the other. Unusually , parsnips, which I really enjoy,  get a section of  their own. Parsnips are quite hard to find in the average supermarket although in season they are plentiful at farmers’ markets.

Jackman writes that “parsnips are finally getting to enjoy their place in the sun”. You can make a Roasted Parsnip Soup or enjoy Bangers and Parsnip Mash. You can also use them to make a  rosti,  just  use parsnip instead of potato; you can add chunky pieces of parsnip to a winter chicken casserole or use a parsnip puree to top a shepherd’s or cottage pie.

In the sub-chapter, The Wheel’s Still In Spin, Jackman reflects on a world gone by: Woodstock; life on the Cape Times when subs edited copy on  the Atex system to today as chief sub-editor of the online Daily Maverick, where he can publish stories and pictures at the click of a button from his home study.

One of the dishes in this section is Lacquered Pork Shoulder or Belly. The lacquer is a dark, syrupy glaze that can also be used on a game bird or duck breast.

There are numerous recipes and include Cape Malay Mutton with Akhni; Beef Fillet with Melted Brie; French Onion Soup; Macaroni Cheese, which with Jackman’s touch becomes a dish fit for royalty, or the snob at your table.  Greek Shoulder of Lamb;  Lemon Roasted Potatoes; All-Day Venison;  Karoo Saddle Chops on the Braai and Duck Two Way with a Spiked Grapefruit Juice, to name just some. If you have a sweet tooth then you will surely be tempted by the Lemon Syrup Cake; Chocolate Tart or Ratafia Figs. Ratafia from Haute Cabriere wine estate is a staple in my liquor cabinet  and using it with figs makes a decadent dessert. You could use Drambuie or Van der Hum, but it won’t be the same.

The recipes are easy to follow and the instructions clear so you could with a bit effort and a lot of passion produce dishes that will have your friends asking for more. foodStuff is much more than a recipe book, it’s a memoir of one man’s life and the adventures that shaped him. Photographs are by Myburgh du Plessis.