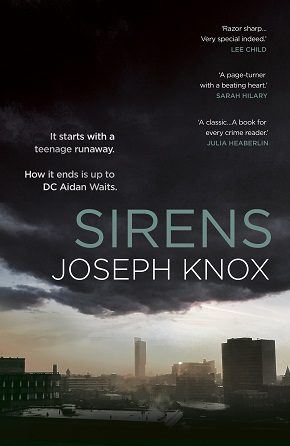 Detective Constable Aidan Waits, a damaged cop because of his addictions, and after reportedly tampering with evidence, is put on suspension and given one chance to redeem himself: go to prison or go undercover. Waits chooses the latter and finds himself in the company of addicts and their dealers; corrupt cops, the dirty underbelly of Manchester, where most of the action takes place and even dirtier politicians.

Waits gets involved with Zane Carver, the city’s leading drug baron, who has an unusual distribution system, called the Franchise operated by young women, through his string of night clubs. Handler Superintendent Parrs, who has secrets of his own, orders Waits to investigate the disappearance of Isabelle Rossiter,17, the daughter of MP David Rossiter, whose Special Branch minder Detective Kernick is not what he seems. The case is linked to Joanna Greenlawn who initiated the Franchise but vanished without trace 10 years ago. The action is frenetic as Waits moves from posh penthouses, to the dark, dark side of the drug scene, pigsty basements and cold, cold streets. Waits pumps himself full of speed and alcohol and often bears the brunt of violence and is beaten up more than once. His anger over his troubled past from when he was a young boy fuels his rage as he attempts to flush out the corrupt, unmask the killers and discover the truth about Isabelle Rossiter and Joanna Greenlawn. The Bug, a drag artist, better known as Daddy Longlegs, a cult figure on the gay scene and who has a long history with Waits, is one of the more unusual characters in Sirens. There’s Grip, Carver’s bodyguard, who drives an iconic Ford Mustang. Grip became a cripple when doing a test for Carver he injected himself with a bad batch of heroin or Eight in street parlance because eight is the eighth letter of the alphabet.  Now another bad batch of Eight has hit the streets, but was it Carver who sent it out? Or his rival, Sheldon of the Burnsiders? Who moved in when the cops closed in on Carver. Waits is the epitome of a conflicted personality who wants to see justice done. No matter the consequences to himself or anyone else.

Siren is a knuckle-whitening read from page 1 and an intelligent thriller with many threads that tie up in a more than satisfying way. I was sorry when it ended. Sirens gets its name from the girls who haunt the drug scene and act as money collectors (the Franchise) and draw their victims in to addiction. Much like the Sirens of ancient Greek mythology who with their singing enticed sailors to their death.

There’s no doubt there’s more to come from Knox whose debut thriller is a winner. It has it all: violence, sex, beautiful women, fast-paced action that doesn’t let up and a staccato style of narrative that just adds to the tension. Put Sirens on your must-read list.