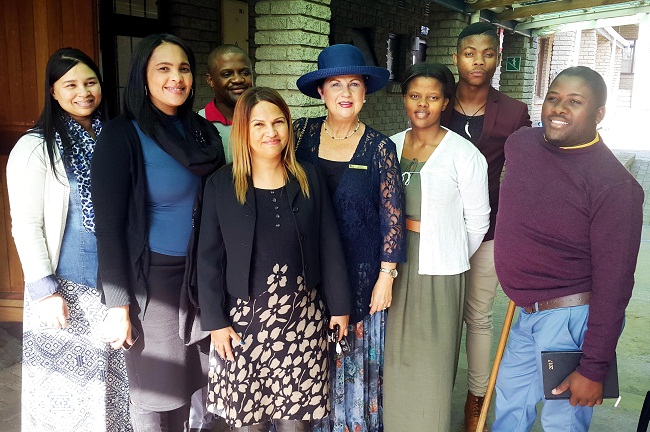 A group of students residing within various areas in the Eden district, last week, commenced with an 8-day training programme in the television and film industry. Ikasi Media was appointed to facilitate the training programme from 15 to 22 May 2017 at the Africa Skills Village in Thembalethu, George.

On 18 May 2017, one of Eden District Municipality’s (Eden DM’s) Portfolio Councillors for Economic Development and Tourism, Cllr. Khayalethu Lose, and officials of the department visited the class to encourage them with the following words: “The film industry is currently receiving increasing interest from national and international production companies, therefore we are investing in your empowerment to develop our young people and equip you so that you will be skilled when the opportunities arrive”. On behalf of the Eden District Municipality, Cllr. Lose further stated: “We value our young people and we wish you all the best with the programme and your future within this industry”.

On Monday, 22 May 2017, these learners celebrated the recognition of their hard work during a graduation ceremony which was attended by facilitators of Ikasi Media, councillors and officials from Eden DM and officials from the Africa Skills Village. Eden DM’s Councillor Liza Stroebel congratulated the learners and said: “Stay positive, speak good over your life, speak blessings over your life and it will manifest.” Cllr. Stroebel further emphasised: “It is important that you write down your dreams on your wall, so that when you leave your home in the morning, that you are reminded of what you want to achieve”.

Learner Carlisle Lodewyk from Rheendendal near Knysna, described the programme as a remarkable experience and said: “My eyes were opened in such a way that I now already see myself in Hollywood”.

Ms. Lamise Inglis, facilitator of the programme, praised the learners with the following words: “I was very impressed with learners considering that they travelled from far, but when they walked into the class they were upbeat and awake and willing to learn. They showed their willingness to be entrepreneurs and willing to create their own content from their communities. I was very impressed and inspired by the group”.

Where it all started

Prior the commencement of the official training Eden DM in collaboration with Ikasi Media, called on businesses to avail themselves for work placement of young people who completed the training.

The main aim of the programme is to develop unemployed youth from previously disadvantaged backgrounds, to become entrepreneurs in the field of television and film.  Through this initiative, trainees will have an understanding on how to become film entrepreneurs within the areas in which they live. Meaning, they will be able to develop community media in their own areas, provide audio visual material and ultimately build up a small business for themselves.

The program outlines theoretical and practical, experiential learning components in respect of occupational skills, as well as basic, generic life skills and also introduced the learner to the important role they play in the development of the film sector within the Eden district.

Best 10 television and film students to be mentored

Now that the training programme has concluded, 10 learners will have an opportunity to be mentored to obtain practical hands-on experience in a supervised environment at companies such as: Daron Chatz Photography & Film, Hartland TV and Garden Route Film Studios. Coordination of the mentoring will be done by Ikasi Media, whose training programme has been promoted alongside an existing MNET feature film production. The film will be produced within the Eden district this year and is named “King of Kwano”.

These learners will be selected according to their performance & understanding of concepts learned in the class.  Understanding these concepts, will enable them to be mentored on set during the filming of the production. This mentoring will also prepare the learners to become entrepreneurially minded, which will empower them to create their own opportunities and also boost their self-confidence.

It is in the interest of the Eden District Municipality to ensure that the youth of the district take part in meaningful developmental activities, especially when it involves obtaining scarce skills in the district. Such initiatives will ultimately contribute in building healthy communities and a well-developed society. Who knows, South Africa’s next recipient of an Oscar award might come from the Eden district.