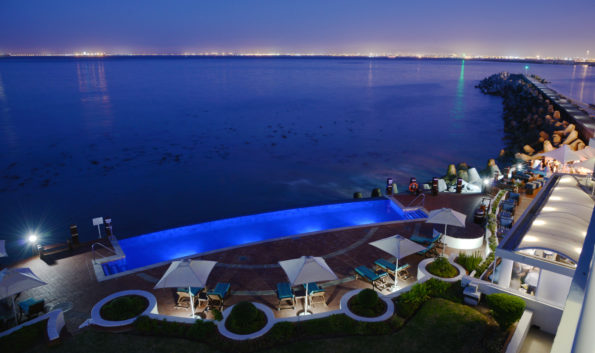 In the past few days the City of Cape Town issued a critical warning with regards to water usage, as usable dam water levels reached 11.2%.

Commenting on the closure of the pool at the Radisson Blu Hotel Waterfront, General Manager Debra Sivertsen says: “The severity of the situation has led us to take this step. As concerned Cape Town citizens, we would like to minimise our water usage as and when we can.”

She adds: “As a hotel group we are acutely aware of acting in a sustainable manner where possible. We believe local and international guests will understand, as we are facing a drastic situation in Cape Town. We will be monitoring the situation on an ongoing basis and, if the water situation improves, we will revisit opening the pool.”

Councillor Xanthea Limberg says: “Every single drop that is wasted or saved is making a difference to our dam levels.”  Councillor Limberg is the City’s Mayoral Committee Member for Informal Settlements, Water and Waste Services and Energy.

The latest figures around consumption of water in Cape Town are 720 million litres of collective use per day, which is 120 million litres over the City’s target of 600 million. The proposed Level 4 water restrictions state that “No topping of swimming pools at all, either manually or automatically”.

Cape Town Tourism CEO Enver Duminy, commented: “In light of the Level 4 Water Restrictions, it’s imperative that all tourism businesses play a role in conserving our valuable resources, not only as a contribution to sustainable and responsible tourism, but also as ambassadors of our city. We trust that our visitors will respect that these efforts are made to ensure the long-term continued enjoyment of Cape Town as a world-class destination,” said

The GM of Radisson Blu Hotel Waterfront, Debra Sivertsen, added that; “This is a critical time for water in the city and we would ask that all guests at the hotel help us to help Cape Town.”

Radisson Blu® is one of the world’s leading hotel brands with 300 hotels in operation in 69 countries and territories. Radisson Blu’s vibrant, contemporary and engaging hospitality is characterized by a unique Yes I Can!SM service philosophy, and all of its first class hotels offer a range of signature features that are empathetic to the challenges of modern travel, including the 100% Satisfaction Guarantee. Distinguished the world over as the brand with Hotels Designed to Say YES!SM, Radisson Blu offers a vivid visual celebration of leading-edge style where the delight is in the detail. Radisson Blu hotels are located in prime locations in major cities, airport gateways and leisure destinations across the world.

About The Rezidor Hotel Group

The Rezidor Hotel Group is one of the most dynamic hotel companies in the world and a member of the Carlson Rezidor Hotel Group. The group features a portfolio of 484 hotels with over 105,000 rooms in operation or under development in 82 countries.

Rezidor operates the core brands Radisson Blu® and Park Inn® by Radisson in Europe, the Middle East and Africa (EMEA), along with the Club CarlsonSM loyalty program for frequent hotel guests. In early 2014 and together with Carlson, Rezidor launched the new brands Radisson RED (lifestyle select) and Quorvus Collection (luxury). In 2016, Rezidor acquired 49% of prizeotel. Rezidor has an industry-leading Responsible Business Program and was named one the World’s Most Ethical Companies by the US think-tank Ethisphere.

In November 2006, Rezidor was listed on the Nasdaq Stockholm, Sweden. HNA Tourism Group Co., Ltd., a division of HNA Group Co., Ltd.—a Fortune Global 500 company with operations across aviation, tourism, hospitality, finance and online services among other sectors—became the majority shareholder in December 2016.

The Rezidor Hotel Group and its brands employ 43,700 people in EMEA and is headquartered in Brussels, Belgium.