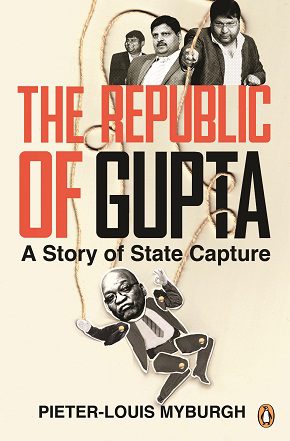 A Story of State Capture

It wouldn’t surprise me if the word Zupta was added to the latest Oxford English Dictionary. It has already become common currency in South Africa for all the wrong reasons – state capture by the Gupta brothers, Ajay, Atul and Rajesh, through President Jacob Zuma and his acolytes. Even after former Public Protector Thuli Madonsela’s startling report on State Capture, and the Sunday Times front page expose  (May 28), Zuma is still denying the “state has been captured”, and any closeness with the family from India. In fact he called the report in the weekly newspaper, a fabrication, especially the news that he and his family were going to settle in Dubai. “Nkandla is my home,” he reportedly told the paper.

However,  investigative journalist, Pieter-Louis Myburgh, has opened Pandora’s box with the disclosures in his book about how deep the rot really goes. It reaches as far back as the Thabo Mbeki presidency who had a secret consultative think tank with the Guptas, although Mbeki, in a letter to the media disputes this, and called it a focus group. But, Mbeki along with his strongman minister in the presidency, Essop Pahad, and FW de Klerk did meet Atul Gupta on a trip to India in 1996 to discuss trade and investment opportunities.

Essop was a business partner of the Guptas and he managed to conceal the Mbeki relationship with Atul. Pahad was involved with the establishment of The New Age and was also appointed a director of TNA Media, the holding company established by the Guptas.

But that was nothing compared to what was to come.

Myburgh has dug down deep in to the mire to uncover the extent of state capture and what it has done to the psyche of South Africans, many of whom wonder where the country is headed. According to Myburgh the Guptas have not only captured the state they also captured South African cricket.

Senior officials of the Western Province Cricket Association were involved in changing the name of Newlands to Sahara Park. Although Arnold Bloch, the then president, was, Myburgh writes, under the impression it was Sahara India Pariwar, an internationally known company, who was the sponsor, Sahara Computers piggybacked on Pariwar name.

Graeme Smith, the former Proteas skipper appeared to be under no illusion and Sahara Computers in 2009 sponsored the publication of his book, A Captain’s Diary, and the relationship with the Guptas continued for most of his tenure as the national captain.  Team mates Shaun Pollock, Makhaya Ntini, Boeta Dippenaar and Jacques Kallis, were also signed up as brand representatives. The Guptas’ influence was so entrenched that they also changed the team’s schedule for their tour to India in 2005.

Myburgh examines the role of the Guptas in South African government from the time they made headlines when they illegally landed in a commercial airliner packed with wedding guests at Waterkloof air force base, a national security point, and were given an official escort to Sun City for the event. Myburgh unpacks it in detail and he proves beyond doubt that Number 1 was behind it. Of course there were scapegoats: Lieutenant-Colonel Christine Anderson and Vusi Bruce Koalane, who was later rewarded for his part in the scandal by being appointed Ambassador to the Netherlands.

One of the investigators of Waterkloofgate was Tom Moyane, now the SARS Commissioner whose relationship with Zuma goes back to when Number 1 was head of the ANC’s intelligence wing and he spent many months in the various military camps (Chapter 14) so I think it’s not surprising that Zuma is still head of the ANC and president of South Africa: he knows where all the skeletons are buried and Zuma is nothing if not streetwise. Perhaps Myburgh can explore this in another book.

The road to state capture really took off in 2001 when the Guptas signed an IT contract with the Gauteng government for its online project, which became one of the province’s costliest failures. Since then the Guptas have become even more embedded in the affairs of state, manipulating people like puppets on a string as the book’s cover shows.

Myburgh explains the Guptas’ interest in the nuclear procurement deal; the influence they have had in the hiring and firing of cabinet ministers, in particular Pravin Gordhan and the bigger question for the moment is what are their links to the new finance minister, Malusi Gigaba, who often says he is own man, even when he was on the SSA’s list of people as being too close to the Guptas.

Myburgh postulates why the President was given another political lifeline  after Herbert Masinga, a Pietermaritzburg High Court judge, struck Zuma’s corruption charges from the roll in 2006. The book covers it all: how the Guptas got up close and personal with Zuma, the reason why the banks stopped doing business with Oakbay investments, the role the Guptas played in the March 2017 Cabinet reshuffle and how they were exposed by Madonsela.

Although most of the events have been covered by the newspapers, as best, they have been cursory, with the exception of the Sunday Times and amaBhungane, the investigative arm of the Mail & Guardian.

Myburgh has written a compelling narrative which includes background that did not make it in to the newspapers. And because it is still a developing story there will be many more headlines and startling disclosures.

If you thought “state capture” was a myth, reading between the lines of The Republic of Gupta, will disabuse you of that notion, even though Myburgh claims he doesn’t have conclusive proof. Perhaps the award-winning investigative journalist is just being modest.