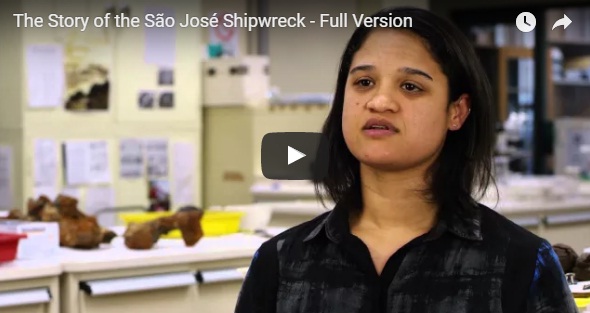 A story of cruelty and passion and two young friends who had no idea what the value and history was behind what they were exploring. The historical story of a slave ship carrying 400 slaves that sank behind the waves of Clifton beach in 1794.  Sao Jose the slave ship was owned by a Portuguese family who owned and operated an international slave trade, selling slaves from Mozambique to Northeast Brazil.

Treasure hunters discovered the shipwreck in the 1980’s and mistakenly identified it as the wreck of an early Dutch vessel. Michael Smorenburg and his friend Jaques who lived on the hills of Clifton beach heard many stories from his father that had been passed down through his family generations about the shipwreck.  Michael and his friend were both in the navy and after their duties they enjoyed diving and exploring the waters of Clifton. The exploring was not all innocent, when it comes to the boys catching crayfish to sell for weekend money, the planning and even almost getting caught a few time does bring in a touch of humor.

Jaques and Michael explored the slave ship, even managing to loosen cannons and finding other items that they thought were worth nothing,  been young men they were having fun.  Michael was obsessed with something he found stuck in the rocks and with every dive he worked on getting it out, he was convinced it was a large tooth of some sort. After many dives Michael eventually got the object out, it seemed meaningless, not knowing the love story, religious beliefs and history it’s understandable that the young man was not happy with his findings.

The married slave couple who were among the other 400 slaves on the Sao Jose were religious and very much in love. The Captain of the ship who breath always smelt of rum named the slave Christian because of his religious beliefs even though his real name was Chikana. He was a very brave and faithful man who was not scared of speaking his beliefs.  The Captain was only interested in rescuing Christian as he was bought by his brother but Chikana always made a plan, he refused to leave his love on the ship even convince the Captain to let her go and did not give up the fight.

In 2015 and beyond full archaeological documentation of the shipwreck site will continue. Initial archaeological surveys and continued archival and community – based research will be used to track the origins of the slaves and the sites in Mozambique, as well as the possible fate of the survivors in Cape Town.