A Joint Operation Centre (JOC) has been activated at 04h30, in the early morning hours of Wednesday, 7 June 2017, after a notification was received from Mr Gideon van Lill from Mountain to Ocean (MTO), and has been used as the regional disaster coordination platform since. 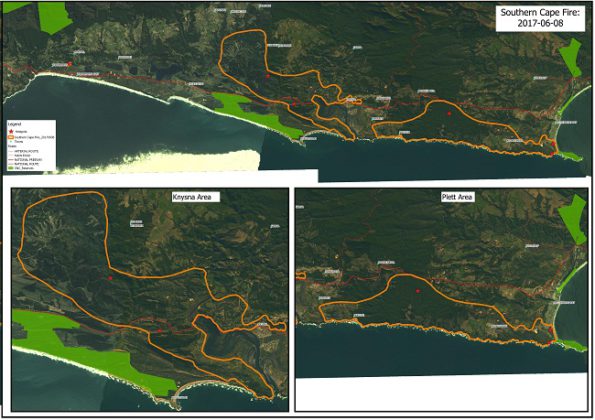 This platform is used as the link between local affected areas and the activation of Provincial as well as National resources.

At that stage, various fires were raging out of control in numerous areas in the Eden district.  All available staff has been deployed, and staff that were on rest days were also dispatched.  Working on Fire (WOF) teams in the district, have been deployed, unfortunately, due to the gale force winds, no aerial support could have been activated, due to the limitations at start-up and shut down of helicopters.

Around 19h15, a request was received from the Acting Municipal Manager from the Knysna Municipality, Mr Johnny Douglas, for the evacuation of certain parts of Knysna.  At that stage, over 24 fires were raging out of control in the broader Knysna area.  The district JOC managed to organise transport in the form of the GO GEORGE buses, to assist in evacuating residents. This was done in collaboration with the Western Cape Provincial Department of Transport and the Provincial Disaster Management Centre (PDMC).

Since last night, an active coordinating platform is in place at the Eden DM DMC, which includes role-players such as Emergency Services, Emergency Medical Services (EMS), Cape Nature Conservation, Department of Social Services, Provincial Traffic, Fire Organisations, Local Government and the Department of Health. The whole progress is being coordinated from this side, where after assistance are rendered where needed.

Some of the major communication challenges experienced during the past two days are due to telephone lines being down.

At this point and time, there are no runaway fires. In Knysna and Plettenberg Bay, several flare-ups and hot spots are being attended to. Late afternoon, aerial support was utilised for an hour and a half.  All areas are being monitored with extreme vigilance.

The Eden District Municipality would also like to thank residents from the district and even from the rest of the country, who have opened their hearts and brought /send donations.