Another cold front passing over the Western Cape tomorrow along with a band of showers and thundershowers over the Karoo and off the south coast during the day ahead of the front. Below the current satellite picture of the front to the west of the country. 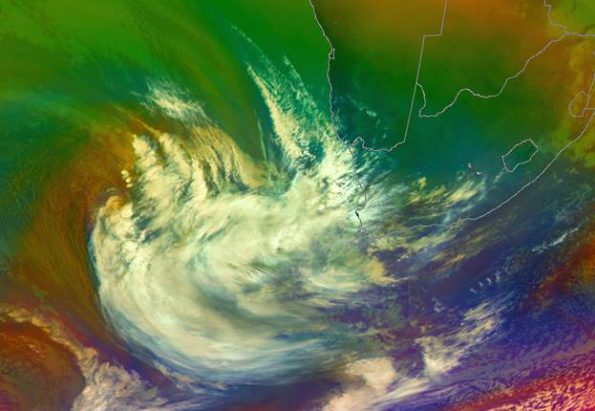 Isolated showers and thundershowers expected over the Central Karoo early tomorrow morning which will move southwards towards the south coast from late morning into the afternoon. Chances of lightning sparse but could spark further fires. Rainfall amounts over the Karoo and south coast expected very little (2-10mm).

Mainly pooling, but localized flooding may occur over the Cape Metropole and Overberg during the day since ground already wet from the system that passed on Wednesday.

Northerly to north-westerly winds expected to pick up over the most of the Western and Northern Cape interior already in the early tomorrow morning (6-8am) to 50-60km/h. However gale force winds (60-70km/h and gusting between 80-90km/h) is expected over southern Northern Cape, Central and Little Karoo during the morning and spreading to south coast by late morning. These winds will make it difficult for helicopter flying to aid in fighting the fires.

Because of the strong winds and dry conditions new fires may spark and also lead to runaway fires as the wind carry them.