In association with Bok Radio. When Laurika Rauch asked Die Heuwels Fantasties in July 2016 whether she can record their hit-song ‘Klein Tambotieboom’ for her new album (Die reis, Oct 2016), the band was over the moon. 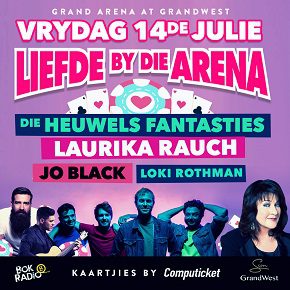 Pierre Greeff from DHF says: “It was great news. We are big Laurika fans. She also asked us to do the backing vocals on her version of the song and we thoroughly enjoyed working with her on it. Her interpretation of the song is very special. We love it!”

Laurika Rauch feels the same about Die Heuwels Fantasties: “I was a fan of DHF’s music from the beginning, but when I first heard ‘Klein Tambotieboom’, I knew, like many others, that this is a song that will go a long way. With most of DHF’s songs, I usually have to concentrate to understand what it is that they want to say with a song, but it does not matter if I get it the first time round or not; they have uncanny ability to communicate with their music and lyrics, even before one fully understands it.  Our collaboration came about when I asked them to re-record this iconic hit for my newest album, ‘Die reis ‘ – but with me! Of course I was caught completely offside when they said yes!  When we started working on the recording, I wanted to keep the integrity of the song at all costs – you cannot improve on their original version – and I think we have managed to preserve the charm and energy of the first recording. It was a privilege to work with Die Heuwels Fantasties. I respect what they do –  everyone of their albums surprises and their latest release Okay! is no exception. What they do is a perfect synthesis of Pierre, Hunter and Fred’s extraordinary talents.”

Die Heuwels Fantasties had the chance to sing Laurika’s version of ‘Klein Tambotieboom‘ with her on stage at Afrikaans Groot in Pretoria last year. On July 14th they will be doing it again at the Liefde by die Arena concert at GrandWest. Jo Black and Loki Rothman will also be on stage.

Jo Black touches hearts and minds and has become somewhat of a phenomenon with his signature brand of positive thinking through his “Be that Guy” campaign. His also became an overnight musical success as the “Afrikaans hipster” whose music video went viral earlier this year. The single “Skepe” has had over a million hits on Youtube to date.

Add the remarkable talents of the versatile guitar virtuoso, Loki Rothman, to the already intriguing line-up and the concert promises to be a very special experience. Loki has mastered most existing musical genres on guitar and his captivating voice paints breath-taking landscapes with his original lyrics.