It is with great sadness to report that a volunteer, fighting the fire in Knysna, had lost his live yesterday afternoon. 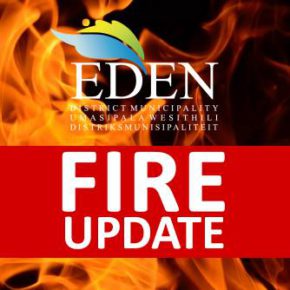 In the Knysna area, no new fires were reported and no evacuations took place during the night. All national and municipal roads are open.

On the previously reported fires, a few flare ups were received in and around Knysna.  The fire near Sedgefield that burned towards Buffalo Bay still has an active fire line, but it is currently under control and holds no threat.  Today, all available aerial resources will be focusing on this line, and they will attempt to extinguish it completely.

Last night, the fire at Brackenhill jumped the road, but has been brought under control and is now contained.  Fire teams from MTO are damping it down, and mopping up operations will commence shortly.

In the Bitou area, the situation has cooled down; however, an extensive area still needs to be damped down.  Access to over grown areas is being cleared by machinery in order to reach deep seated smouldering fire lines. The 802 Fixed Wing Bomber from WOF has been deployed, to assist with wet lines at the Kransbos plantation fire, near Uplands.

In the George area, all fires are contained, however flare ups were observed at the Hoekwil/Serpentine Heights and Geelhoutboom fires.  Firefighting crews are currently busy with operations in order to contain these fires.

Mossel Bay Fire and Rescue are currently busy with firefighting operations in the Friemersheim area.