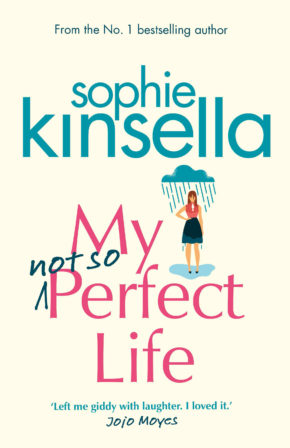 Sophie Kinsella who has several standalone novels to her credit is probably best known for her eight Shopaholic books featuring journalist Becky who advises people on how to manage their money. But can’t handle her own financial issues. The standalones include Remember Me, I’ve Got Your Number and Wedding Night.

Her latest, My Not So Perfect Life, stars “Zummerset’s” (Somerset) Katie Brenner, who was brought up single-handedly by her dad, when her mother died. She leaves the family farm for London where she always dreamed of living and works as an intern for top brand agency, Cooper Clemmow. But she feels guilty because she thinks her dad disapproves of London. She  moved there after her first internship in Birmingham where she tried to shrug off her Somerset origins.

However, living in London’s always been her dream. Just like life though, nothing goes according to plan. She lives in a crummy flat in Catford which she shares with web designer Alan Rossiter and the taciturn Anita, who is “uber cool “but not doing friends until she’s 30”. Katie, who prefers to be called “Cat” at work is financially challenged: ok, broke, and living on a shoestring budget. In fact her room is so small she keeps her clothes in a hammock and wears knockoffs with stripped-out labels that say Christian Bior. However, Cat yearns for the perfect life she imagines her brilliant boss, Demeter (Goddess of the Harvest) Farlowe has and lives. She’s always the first to have the latest gadget or eat at the newest restaurant, read a manuscript before the book is published, lives in a mansion and she only eats organic.

At work Cat’s given a lowly job, inputting and collating data from surveys. It’s a humdrum life but she is yearning for better things and hopes that her pretentious and patrician boss will notice her and give her a chance.

Meanwhile Cat is posting happy pictures on Instagram of a life she doesn’t lead: visiting posh restaurants and the hottest spots in London where the A-listers hang out. Then a spark is lit when she meets creative genius Alex Astalis, who wants her to be his research assistant, to promote a range of adult toys which include drones, Diabolos and stilts, and they have great fun playing with them on the roof of the Cooper Clemmow building where Alex’s inner child is on display.

Cat’s life soon comes crashing down when Demeter fires her without warning and, as the staff say, she’s been Demeter-ed. So she slinks back to Somerset telling her dad and his partner, Biddy, that she’s on a sabbatical. She’s too scared to tell them she’s been sacked. She can’t bear to hear her dad say, “I told you so.”

But they are puzzled when she spends so much time at her computer and on her phone: they think she’s so important that Cooper Clemmow can’t do without her. In reality she’s applying for jobs and sending out her CVs.
Then they rope her in to helping them change the farm into a resort for glampers. Cat, now back to Katie, is full of ideas, to build luxury yurts instead of boring tents, planned activities for the guests, adults and children alike. She designs the brochures and with the help of her ex-flatmate Alan, sets up a website. The project is an instant success, with dad playing Farmer Mick much to the delight of adoring children while the adults enjoy Biddy’s five-star cooking and home-made preserves.

Then Demeter, her husband James, and their two brats, Coco and Hal, turn up unexpectedly for a glampers’ holiday. So Katie plans her revenge. However, this time the saying, “revenge is a dish best served cold”, doesn’t pan out the way she expects.

Will Katie finally make her dreams come true? Will she find true love? To say more would be a spoiler.

My Not So Perfect Life is an entertaining novel with plenty of laugh-out-loud moments.  There is also a serious side to it: a look at social media where the image we project to the public (and our closest friends) is as far from reality as A is from Z.  The characters are all finely drawn, you’ll be cheering and crying in turns for Katie; you’ll have some empathy for Demeter who is quite different from the face she presents to the outside world, and you’ll wonder if the conflicted Alex turns out to be the rolling stone that finally gathers the moss. A line in the book that will resonate with many people and goes to the heart of the story is this one, uttered by Katie. “Everyone’s got a bright-and-shiny, even if it’s hard to find sometimes.” The book is almost 400 pages and you’ll be captivated from the start.