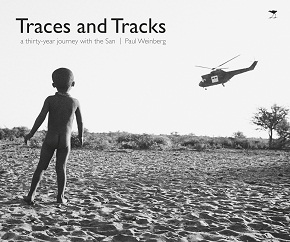 A thirty-year Journey with the San

Pre-eminent photographer Paul Weinberg has spent 30 years tracking the San through war and peace and the amazing images in this book are testament to his dedication.

His photographic journey and words dispel many of the myths associated with the San and leave the reader with a deeper understanding of the challenges facing them in the modern world.

Weinberg first came into contact with the San in 1984. Before university, and after leaving school, he was conscripted into the army and was sent to the border by the Apartheid government to try to “win hearts and minds” of the San and the local population who were drawn into the war. Weinberg’s guide was celebrated filmmaker John Marshall, whose family had been documenting the lives of the San since the 1950s. “Nothing could have prepared me for what I was about to see,” writes Weinberg. He encountered the San that were under pressure to hold on to their land, values and their hunter-gatherer lifestyle. Their lives had been transformed through the cash wages the SADF paid them, and on paydays they would  blow their money on alcohol. Weinberg said he saw a village that looked like a battlefield, with bodies strewn all over, passed out from drink. On the other hand miles away there was clear evidence of the San living their lifestyle in an environment that offered hope for the future. The popular academic position at the time, writes Weinberg, was that the San of South Africa “were extinct”. Which was a myth and he met thousands of people with San heritage living in South Africa. Today there are an estimated 113 000 San who live in southern Africa, mainly Namibia and Botswana. They speak about 35 languages and only a handful practise their hunter-gatherer lifestyle, with external factors influencing them. Weinberg says that the prevailing cliché promotes the San as “beautiful, small people, children of nature, who hunt and gather and live a harmonious existence untouched by history”. Even though reality defies this, books and films conspire to add to the myth.

Freedom from the apartheid government entrenched San land rights in Namibia but the Namibian government did nothing to stop the Herero farmers from encroaching on the San’s property. Weinberg writes movingly about the San in the chapters Erasures, Encounters and Constructions (the San in South Africa); Diamonds, Dispossession and Slow Poison (the San in Botswana); Namibia: History and Hope; and Closing the Circle. Weinberg recalls one incident about the late Dawid “Ou Regopstaan” Kruiper, and his family who were acting in an international feature film, with a New York director. It was about an alien dropping out of space and landing in a traditional San settlement (probably a nod to The Gods Must Be Crazy when a coke bottle falls out of the sky). However, after two days without food Kruiper called a strike. The next morning Weinberg passed a furious director and Dawid, then 90, in the back of the bakkie with R1 500 and promises of more. But it didn’t have a happy ending and the Kruiper clan were later exploited even more by a philanthropist -businessman Lokkie Henning and they were systematically removed from the Kgalagadi Transfrontier Park to Kagga Kwama at the foot of the Cederberg, more than 1 000 kilometres from their ancestral home. Henning who also acted as their agent paid the Kruiper clan R800 for all the films they appeared in which included Suncross People, Red Scorpio and Odd Ball in addition to The Gods Must Be Crazy.

There are numerous images in evocative black and white and full colour of the San at work, at play, at peace and at war, as well as examples of their rock art. Weinberg’s three other books on the San are Shaken Roots; In Search of the San and Once We Were Hunters.