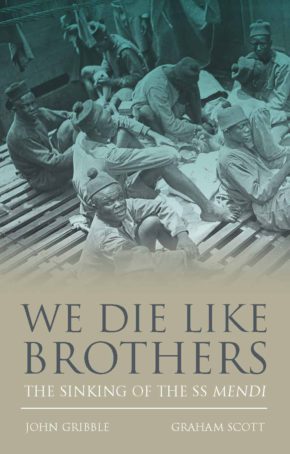 The Sinking of the SS Mendi

One of the enduring stories that have survived the sinking of the SS Mendi off the Isle of Wight 100 years ago is the one about Reverend Dyobha Wauchope who inspired the doomed men of the ill-fated vessel by leading them in what has been dubbed the “Dance of Death”. The authors of “We Die Like Brothers’, John Gribble and Graham Scott, unpack the legend and the man in great detail and come to a surprising conclusion. The SS Mendi, which was carrying men of the SANLC (the South African Native Labour Corps) was virtually ignored by both Great Britain and South Africa, for political reasons. In March 1934, the authors write, an article in the South African Chamber of Mines and the Native Recruiting Corporation’s newspaper,  ‘Mouthpiece of the People”, in 1934, referred to the legend. In 1936, two years later there was an obituary by Xhosa poet, Samuel E K Mqhayi identifying the cleric as the hero who rallied the men on the deck of the SS Mendi leading them in the “death dance”. Gribble and Scott ask many questions and decide that the “death dance” did not happen the way legend has it. But to find out how they came to this conclusion you will have to read the book.

The SS Mendi has reference to the Birkenhead which sank 60 years earlier. It was also carrying troops and gave rise to the famous cry, “women and children first” in the event of a disaster. Scott and Dribble suggest that the death drill may have been modelled on the events of the Birkenhead.

Here’s a brief history: The SS Mendi carrying South African Troops from the Native Corp was travelling to the Western Front when on February 21 1917, it collided in heavy mist with the SS Darro off the Isle of Wight and sank. It became a symbol of Black South Africans’ fight for political and social justice.

The sinking of the steamship out of Liverpool now occupies a special place in history. The troops were black and part of the SANLC but back then black lives didn’t matter, either at home or in Great Britain.
The 13 chapters cover WWI labour; South Africa and the outbreak of WWI; the birth of the SANLC; Native Labour for France; the Last Voyage of the Mendi; Aftermath and Enquiry; Dyobha – the man and the myth; Foreign labour on the Western Front; the SANLC experiment ends and An archaeological insight.

Private William Matumetse was just 16 when he enlisted and his father, Reverend Nathan Matumetse and his mother, were distraught when their favourite son signed up and left the responsibility for the decision to go or stay to his grandfather Thomas. William walked 30 miles to visit the old man, who dismissed the parents as cowards. But he gave William his blessing in quite dramatic fashion. Another who enlisted was a married man, Private Zikaniso, a Zulu from Richmond, Natal, who told his wife he was leaving to look for a job. There is an interesting exchange of letters between NCO Colour Sergeant Robert MacTavish and his wife, Bert. And there is an image of a postcard that MacTavish sent to one of his sons. Not of the Mendi though. But of another ship in Table Bay harbour, and he probably realised that the boy wouldn’t know the difference.

The wreck of the Mendi was discovered in 1945 until Martin Woodward “rediscovered” it in 1974 and in the following years found a number of artefacts and he made a crucial find: a white ceramic bowl, which after some research established that it came from the Mendi. Although the site continued to be dived by recreational divers, a geophysical survey in 2007 provided the first clear picture of the vessel.
We Die Like Brothers is a fascinating glimpse in the SS Mendi which has finally been elevated to its rightful place in history. For the people of England it is part of their underwater heritage. For South Africans it is another story altogether. The We Die Like Brothers exhibition held at Delville Wood to mark the loss of the SS Mendi and the presentation of medals to the descendants of SANLC men, will, the authors say, continue the process of righting the wrongs of the past. “It also highlights the importance of a shipwreck that now stands for a shared heritage in South Africa and the UK.”

Gribble, a South African living in Cape Town, has focused on the role that the men of the Mendi played in the conflict. While Scott , the son of a Liverpool family was drawn to the Mendi because it is a Liverpool ship. But for both of them, they say, it is a story of how men treated unfairly in life have now been honoured regardless of creed, colour or rank.

There are numerous historic images of artefacts, SANLC members, Dyobha, sketches of the Mendi, a postcard from the British and African Steamship Navigation Company depicting the Mendi. In addition there is an Image (1995) of Nelson Mandela and Queen Elizabeth II in Soweto at a memorial to the men of the Mendi.

Although several books have been written about the SS Mendi, among them Fred Khumalo’s Dancing the Death Drill (Umuzi), a fictional recreation of the tragedy; Men of the Mendi by Brenda Shepherd and Black Valour by Norman Clothier, few as far as I know, have explored it from an archaeological point of view.
We Die Like Brothers is a look at the past and a hopeful glimpse of the future. It is written in easy-to-understand English and it is a must for anyone interested in South Africa’s maritime and social history.