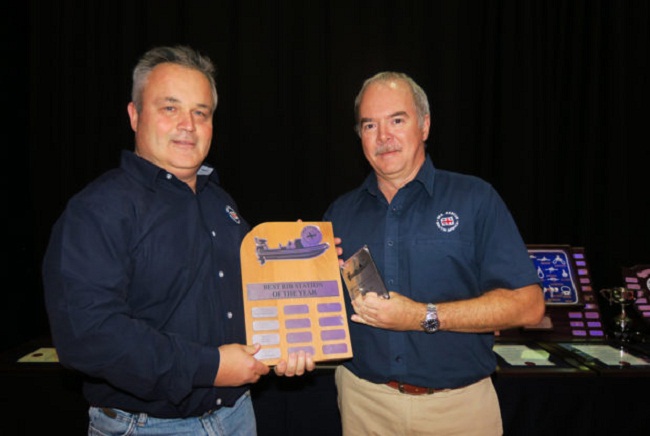 A full list of awards presented at this AGM and pictures can be found on our website.

The Station 2 crew of rescue boat “Excalibur” based at Bakoven

On the afternoon of Thursday 26 November 2015, the 29 metre steel Fishing Vessel BARATZ was sinking with 25 crewmen aboard in rough sea conditions.  They were 2 miles offshore, South East of Cape Recife, Port Elizabeth.  The sea conditions were 4/5 metre swells, with a Force 6 south easterly wind of 25 knots and rain squalls.

CEO Letters of Appreciation – The boat crew and helicopter crews:

On 27 September 2015, a Mayday call was sent at approximately 18h00 from FV Lincoln. They reported a position 20nm south of Hangklip and 32nm south east of Cape Point, taking on water.  All 21 crew on board Lincoln were preparing to abandon ship. Station 10, Simon’s Town, Station 17 Hermanus, Station 29 Air Sea Rescue, MV Harvest Rising, FV Fuchsia, FV Armana, and FV African Queen, all diverted to the area on hearing the Mayday call.

Directors’ Thanks are awarded to:

The Captains and crews of: Harvest Rising, Armana, Fuchsia and African Queen (Awards to take place at their offices)

Our congratulations to two young lifeguards for the rescue of a woman off Strand beach on the morning of Saturday 26 March 2017.

for his heroic effort on the evening of 25 July 2016 when he went to the aid of two men who were trapped by the flooding at Umlaas river south of Durban.

On 09 November 2016, during a violent storm that caused the flooding of the N3 during peak hour traffic.  The swift and decisive actions of Bianca-Lee Bird, Vuyani Dingiswayo and Lucas Bota helped save the lives of many people trapped in their cars on the flooded highway in Johannesburg.

CEO Letters of Appreciation are presented to:

For coming to the rescue of the man swept off the rocks at Three Anchor Bay.

The Most Improved Station of the year 2016 is awarded to: Station 26 Kommetjie  (Ian Klopper – Station Commander –  received the award for Station 26, Kommetjie)

The Best RIB Station of the year 2016 is awarded to: Station 23 Wilderness (Robert van Helsdingen – Station Commander – receive the award for Station 23, Wilderness)

Andrew Koch of Claremart Auction Group for offering his time and expertise at our Annual Wine Auction which we host together with Rotary.  He has done this consistently for an incredible 17 years and always at no charge.

Directors’ Thanks to Mike Elliot – on the occasion of his standing down as Operations Board Member for NSRI Region 3, Eden District.

Directors’ Thanks to Dick Manten – on the occasion of his standing down from the position of Station Commander of Station 22, Vaal Dam.

Directors’ Thanks to Hennie Niehaus – on the occasion of his standing down from the position of Station Commander of Station 23, Wilderness.

Chairman’s Letter of Appreciation to Chris Hudson – on the occasion of his standing down from the Awards Committee.

Chairman’s Letter of Appreciation to Mike Meyer – to record our appreciation for your work as one of the founders of the South African Whale Disentanglement Network (SAWDN).

Download for all citations handed over to our Award Winners: AGM Citations

NSRI was founded in 1967 after 17 fishermen lost their lives after a trecherous storm off Still Bay.  A swimming teacher, Miss Pattie Price, in Simon’s Town heard of the tragedy and was moved as she herself had been rescued by the RNLI (Royal National Lifeboat Institute) in the UK as a child.  She began writing letters to the newspaper and calling for funding for a rescue service.  The Master Mariners funded the first rescue boat named Snoopy and the first two volunteers to sign up were Captain Bob Deacon and Ray Lant.  50 years later the media continues to support us and follow our news, private individuals continue to campaign for us and help us raise funds, the Master Mariners and numerous other companies, trusts and government contribute to the cost of running a service of this nature and we have over 1 000 rescue crew who continue to risk their lives to save strangers, at no charge.

In 2005 NSRI looked into drowning statistics to see who was most at risk and established a proactive arm to their rescue service by way of the WaterWise Academy where instructors visit schools in underprivileged areas to present water safety classes.  These classes are engaging and interactive and include songs, dance and rhyme.  The children learn what to do in an emergency, who to call for help and how to initiate very basic bystander CPR using chest compressions.  To date we have reached over R1m children through this programme.

In 2016 a Drowning Prevention department was established to look into building stronger relationships between the rescue organisations, to improve beach signage, to lobby government, to include drowning prevention in the school curriculum, to promote water safety through campaigns about the risk of nappy buckets in townships, to education around rip currents, to the wearing of killswitches and lifejackets on dams and in the sea.