Almarie du Preez, with her soothing voice and unique musical talent, certainly needs no introduction in music or entertainment circles. 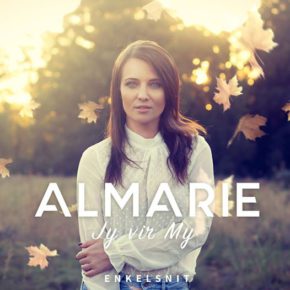 The former JAM-presenter has not only managed to establish herself as a singer, songwriter, radio presenter and performer over the past seven years, but is also known as actress, writer and TV presenter.

The artist’s first Afrikaans single, Jy Vir My, has just been released. It is a strikingly beautiful combination of heartfelt lyrics and catchy melodies that are not only easy to listen to, but will also capture the hearts of listeners and leave them longing for more. “The song is about discovering everlasting love. Sometimes the most beautiful encounters lie in those moments, when you are not looking for it, but it keeps finding you. It is also about the fact that sometimes it takes time to realize that a person is everything that your heart desires and even if things do not work out, the beauty of memories continues. I think every person longs for true love and whether you’re still looking, or have already found your special someone, this song will make you feel nostalgic,” she says

According to Almarie, love is a subject she seldom writes about and that her latest hit was inspired by a previous relationship. “The relationship was very spontaneous, but it took me a couple of years to really notice the person. So it was not love-at-first-sight. I wrote the music and lyrics for the song myself, while StoneBear & Mayor assisted with the production process.”

Almarie’s love affair with music started when she was just a little girl and her parents used to listen to legends like Laurika Rauch, Roy Orbison, Koos du Plessis and Queen. She used to listen to the radio all the time, were always up to date with what was happening on the music charts and dreamt of being part of a rock band. This dream came true, later in life, when she became the lead singer for the group, Friday & The Hype. The talented star started playing instruments when she was still at school and has a Grade 8 qualification in Piano from Unisa, a Master’s Degree in Music Therapy, and also had formal vocal training.

Although she has been making music all her life, her career officially took off in 2010 after she recorded an acoustic version of the Straatligkinders hit, Kan Ek Met Jou Dans, which was very well received and can gets regular airtime on radio and television. Since then she has sung with many seasoned singers, such as Bouwer Bosch, Robbie Wessels and STELLA, and was even co-author for songs used in movies like Mooirivier and Strikdas. She lists the solo stage production, Almarie Vir Altyd, she did at Atterbury Theatre in 2013, as well as her role as presenter of JAM on kykNET NOW!, as some of the highlights of her career. Roles in programs such as Binnelanders and Generations, as well as in the movie The Roar (along with Heinz Winckler) and a regular radio program on Radio Pulpit, further strengthened her place in the entertainment industry. She has also been a worship leader, at Moreletapark Church in Pretoria, for a few years. “I like working on television just as much as working on stage. I enjoy discovering each person I interview with the viewers. On stage, my favourite place is behind the piano while I sing,” she shares.

Coldplay, One Republic, Tori Amos, Sting and Florence & The Machine are among the musicians who had an influence on Almarie’s musical style. She also has great appreciation for Loki Rothman and Chris Chameleon’s musical abilities. Although she has an honors degree in Psychology, she would have loved to try out race car driving if she had to pick a different career, but is happy with what she is doing with her life. The industry also taught her to be true to who she is. “Your best chance to be happy as a musician, is to make music that is true to who you are and not what you think people want to hear.”

There is still a lot of musical goals that Almarie would like to achieve, including her debut Afrikaans album, which she doesn’t want to reveal too much about at this stage. She would also love to work with Francois van Coke one day, because the honesty in his lyrics inspires her and she believes that their voices would sound good together. “I admire every musician who works hard and makes music which is true to who they are. My plan is to transform all my experiences and thinking into new music, which will appeal to listeners and inspire hope. I would like my music to encourage people to delve a little deeper into the meaning of their own lives,” share this talented artist.

Jy Vir My is an absolute must for any music lover’s collection. This combination of fairytale-beautiful lyrics, striking melody and soothing voice, is the perfect ingredients for a hit that will remain popular for years to come.