CAPE TOWN. – Four world-class climbers – two of whom conquered Everest – have spent 1600 hours of preparation in 2017 for the goal of summiting nine South African peaks in a record time in pursuit of generating public support of R100000 to equip 350 learners with unique software-development and IT-skills. 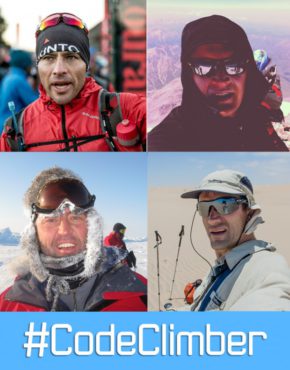 All of this form part of project  #CodeClimber, as Tian Liebenberg, head of the Volunteer24-led project, and three fellow-climbers are embarking on one of the most ambitious South African mountain-summiting adventures ever attempted on South African soil.

If they break the SA record and the SA public generously support #CodeClimber on the crowd funding platform Backabuddy, Liebenberg and Co would purchase code-programs from the organization Code$Change to equip 125 learners with the IT-development, soft-ware programs and technological advancement

The four climbers will attempt to reach the peak of nine South African summits in a whirlwind cord-breaking time. The expedition leader Tian Liebenberg is at the helm of this Volunteers24-project.

The first stop for the partners in the #CodeClimber-project (the members include Code4Change, Backabuddy and the expedition leader of the SA record attempt, Tian Liebenberg, and his Volunteers24-colleagues at the Zitikeni Secondary School in Tembisa on Tuesday 20th June from 14h00 to 1430.

The coding program will equip learners with the different soft-ware programming platforms and a unique coding-language to acquire advanced IT-skills.

“Basically, to beat the record, we will have to negotiate the 145 km by running almost the equivalent of two Two Oceans Marathons in successive days, then rest for a day and then complete almost another Two Oceans marathon,” mentioned Liebenberg.

“That is how challenging this is,” he added.

The idea to summit the nine South African peaks while pursuing a record was birthed when Liebenberg approached Adrian Saffy, an attorney and adventure racer, Alex Harris and Sean Disney to embark on this race for mountain glory.

Both Harris and Disney have ascended and conquered the highest peaks in each of the continents, including reaching the peak of Everest. The have summited some of the peaks more than once and are considered mountaineering legends

Harris rode his mountain bike from the summit of Mount Kilimanjaro to the coast in less than 24 hours – a world-record in 2017. He also led mountain bike riders to the base camp of Mount Everest in May 2917.

Liebenberg and his two colleagues who have surveyed the world from the top of Everest before, Harris and Disney, will be at the Zitikeni Secondary School on Tuesday afternoon to mingle with the learners and generate support for the coding project.

Jonathan Novotny, founder of Code 4 Change, who is developing the coding programs said the aim is to inspire the next generation of (Mark) Zuckerburgs (founder and chief executive officer of Facebook) in Africa.

“The cause is to donate R300 to introduce training during a week-long coding course to eager and excited youth in Tembisa’s schools.

“We are raising R100 000 to bring coding to three schools in Gauteng and impact 350 learners with a fun, basic coding course, while encouraging the start of new coding clubs in these schools,” Novotny said.

“But we need the public’s support on the crowd funding platform Backabuddy in support of the world-class climbers’ quest and in financing the code cause for these 350 learners,” he added.