“He might make mistakes, maar hy bly altyd great… and remember my friend, not all heroes wear capes…” is just one of the catchy lyrics taken from JACK PAROW’s brand new hit, Super Van, which was created to be the theme song for the hilarious new movie, Van Der Merwe, set to open at cinemas nationwide in July. 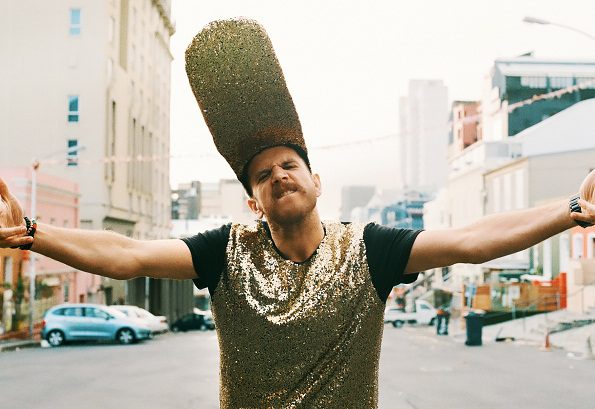 Multi award-winning rapper and songwriter, JACK PAROW (aka Xander Tyler), shot to fame in 2009 after releasing his debut hit single, Cooler as Ekke, which took the country’s music industry by storm.

Over the years, he has become almost as famous as the hilarious icon that the film is based on. He has had various successful albums and hits, won several coveted music awards and recently also launched his own brandy label, Parow Brandy.

The musician was absolutely thrilled when he was asked to create the title track for this family comedy: “I was super amped when they approached me to do the song, because I love Van der Merwe and everyone who is a part of the film. Rob is an amazing actor and I knew that it would be cool to get involved with this project, because I grew up listening to Van der Merwe jokes,” says the rapper. “The song is about Van and his vibe. It is not necessarily only about what happens in the film, but also provides my take on the Van der Merwe we all grew up with. It is fun and humorous and everyone will be able to relate.”

“I wanted the theme song for VAN DER MERWE, one of South Africa’s greatest icons, to be created by one of the country’s biggest music icons, JACK PAROW,” says director, producer and screenwriter, Bruce Lawley. “His lyrics and sense of humour are first rate and I believed he would be able to deliver a title track befitting the tongue-in-cheek comedy genre of the film. The song was specially written and produced for the movie. It is about Van. The man, the myth, the legend… about things which are important to him. The lyrics capture the essence of Van and the many aspects of his character, all of which are explored in the film. It has got some great, funny, clever lyrics and a very catchy tune.”

VAN DER MERWE, with Rob van Vuuren in the lead, is set on a farm in South Africa. The story centres around Van’s daughter, Marike (Reine Swart), who returns home from a gap year in England with her new fiancé, George, a British medical student. This sets the scene for all sorts of problems and challenges.

Not only does Van have to come to terms with the fact that his daughter is marrying an Englishman, but he is also pressured by his bossy, staunchly traditional father to put an end to the relationship. This puts him in a precarious situation with a difficult choice: risk the wrath of his father by condoning the wedding… or obey his father, whose approval he so desperately wants, and risk losing his daughter forever. When the family of the English fiancé arrives on the farm, the fireworks really begin as the clash of cultures results in a number of side-splitting incidents and hilarious situations, as we witness some classic Van der Merwe jokes played out in front of our eyes.

“In every country, there is a person who is the butt of all jokes. In Ireland it is Paddy, in Israel it is Hymie, in South Africa, that person is Van der Merwe… this story is about him. I wanted to make a film about a single character, like ‘Ace Ventura’ or ‘Zoolander’, but with a South African flavour. Van is part of our culture, a character we can all relate to. He has a history and a place in our hearts. Bringing him to life on the big screen is something a lot of people want to see,” says Bruce.

Light-hearted, and entertaining, the story is supported by an array of interesting characters that were specifically created to highlight Van’s shortcomings. Well-known actress, Chanelle de Jager, plays Van’s wife, Suzette, who is determined to save the day, while Ian Roberts can be seen as the overbearing Oupa Van, who is bound to strike a chord with any audience. Other actors that can be seen in the movie, include Adrienne Pearce, André Jacobs, Rika Sennett, Erica Wessels, Louw Venter, Benedikt Sebastian, Matthew Baldwin, Neels van Jaarsveld and Melt Sieberhagen to name but a few. Kurt Darren also makes a cameo appearance as a wedding singer and Barry Hilton plays Freddie, the barman and Van’s best friend.

“VAN DER MERWE is a feel-good family film. More than anything, we want viewers to leave cinemas smiling and with the positive message that no matter what your circumstances (or shortcomings) are, things will be okay. But you have to be able to laugh at yourself. You can’t take life too seriously. Be true to yourself, keep trying, and keep smiling,” Lawley concludes.

VAN DER MERWE promises some truly funny laughs about family politics, awkward situations and living up to the Van der Merwe title. The film will be distributed by Ster-Kinekor Entertainment. It was produced by Craig Jones, Bruce Macdonald, Murray Macdonald and Bruce Lawley and will be released nationwide in cinemas on 28 July 2017.