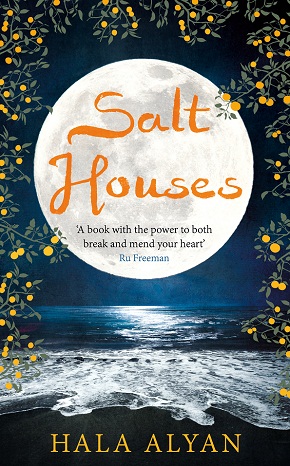 What happens to you if you are a refugee fleeing from the violence in your country, where you and your ancestors have lived for generations. This is one of the questions that Salt Houses asks, a book which can be read on different levels. On the one hand it is a family drama and on the other it is a search for identity, and on another level it examines the Israeli-Palestinian conflict from a different perspective.

Salt Houses is about the pain of displacement and what happened to the Arab survivors of the Six Day War in 1967, it explores the conflicts they have with family members, their parents, their spouses, their obstinate children and grandchildren, some who eschew Islam, in the countries they run to, while others “take on the veil”.

It is a story of the “Wandering Palestinian”, not the “Wandering Jew” and is narrated through the offspring of Hussam and Salma, the patriarch and matriarch of the Yacoub family which includes daughter Alia, a restless, modern Muslim woman, her husband Atef , an academic, their children Riham, a quiet, but devout chubby teenager, the boy Karam, the impetuous Souad, who is so like Alia that they’re always clashing; and Atef’s best friend, Alia’s brother Mustafa, who is slowly being radicalised; her sister Widad and her husband, the gout-ridden Ghazi.

They are refugees but they are a middle class family with money and the privileges that go with it, so they don’t suffer the deprivations that other displaced people have to contend with.

We first meet the Yacoub family in 1963 in Nablus where they settled after fleeing from Jaffa three years earlier, when the Israelis stormed through the streets, signalling the birth of a new nation. And Salma is telling the story.

Yacoub has succumbed to cancer and he believed his illness was tied to the Israeli occupation. Now in Nablus, Salma is reading Alia’s coffee cup on her wedding night to Atef, but she is not happy with what she sees. So contrary to popular wisdom, she fudges the truth and hopes that she has seen a speckled horse, not a zebra. The horse means travel, a difficult first pregnancy, but also luck. Many of the predictions come to pass as we learn through the eight main characters who tell their stories from around the globe and when they “come home”.

Salma reminisces on what once was and still hankers for Jaffa, even though she has made a home in Nablus complete with a fertile garden. After the ’67 war the family takes refuge in Kuwait City. But Alia hates it, even though she is now closer to her sister, Widad, and yearns for home, wherever that may be.  She is also mourning Mustafa who was killed in the war.

Atef bares his soul to Mustafa, in the form of letters, as a kind of catharsis.  We see the children, Riham, who took the veil after she almost drowned; Karam and Souad, grow up, feel their pain as they are uprooted again when Saddam Hussein invades Kuwait and they flee to the four corners of the earth: Boston, Amman, Paris and Beirut , where they in turn have families and have to start again. Riham, Souad, Manar, Linah, Alia and Atef describe their lives in the places they live. Strangely silent is Karam’s voice who is studying engineering-architecture in Boston.

Salt Houses is a moving and emotional story that will give you another view of an age-old conflict and its unintended consequences.

Through their shared experiences the family members have changed.

Life comes a full circle and we find Alia, who now has Alzheimer’s, on her birthday in Beirut with the whole family, reflecting on what might have been. Bringing with it a glimmer of hope as she remembers her mother’s garden in Nablus, the prophecy, and listening to the ancient, salvaged music, “Yalla tnam, yalla tnam”, a lullaby for babies.