Talented songwriter and vocalist, Len Muller, definitely needs no introduction. He has one of those unique voices that is able to keep audiences mesmerized throughout each of his performances and the musician has managed to conquer the hearts of music lovers in a very short period of time. 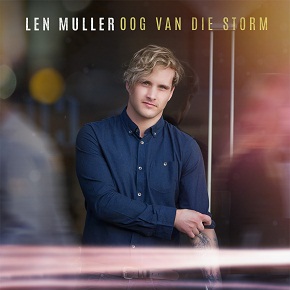 His second studio album, OOG VAN DIE STORM, is finally here and promises to surpass the success of his previous offering.

The album can be described as Afrikaans Acoustic and combines the sounds of all the musician’s favourite instruments, including the banjo, harmonica, cello and acoustic guitar. “I wanted to write about the seasons a person experiences in life. Sometimes it is an ordinary adventure (Doodgewone Avontuur) and sometimes you find yourself in the eye of a storm (Oog Van die Storm). Maybe we would be able to have more joy if we celebrated these seasons instead of resisting them. It is like the album has two sides and two different styles wrapped in one, with two producers working on the final product. Gideon Botes worked on the contemporary songs on the album and Francois de Klerk focused on the alternative tracks. There is also a little Blues. It’s a genre that I have always wanted to do and Dan Patlansky and I teamed up to record a song,” he reveals.

Len, who is renowned for his captivating lyrics and soothing voice, started his solo career in 2012 when he decided to trade the sandy beaches of Richards Bay for the city lights of Pretoria. His debut album, Doodgewone Avontuur, was released in 2015 and officially launched his career in the South African Music Industry. This masterpiece also got him nominated for various Ghoema- and Tempo awards, including Male Artist of the Year and Newcomer of the Year. His debut single, Smag na Jou, remains a firm favourite and was used on the soundtrack of the romantic comedy, Strikdas. The song, Vir Die Een Wat Geval Het, with Joshua na die Reën, made big waves in the music industry in 2016 and still gets regular airtime on radio and television.

Although Len did most of the writing himself, he also collaborated with a few talented writers to ensure a flawless end-result. “I wrote the title track with Mynardt Smit. It is a good indication of the season that I am currently in. The first album, Doodgewone Avontuur, was somewhat of a leap of faith into an unfamiliar world and I am now in that ‘storm’. With this album I want to express the fact that God can be the peace in the very eye of the ‘storm’. When everything around you looks like a hurricane, you can be safe and sound in the hands of God,” says the singer.

A heartfelt rendition of the Laurika Rauch hit (written by Chris Torr), Die Gang, is set to impress even the most critical ear. “Len has a soulful voice and he does a captivating version of the song. I hope it is received very well,” says Laurika. Chris Torr also shares the sentiment. “I had the privilege to do a cover of an old Laurika Rauch song. Listeners can expect a fresh take of this song on my new album,” Len says enthusiastically.

Sing vir Sente, the second single from the long-awaited album, was released on 5 June 2017 and is already a radio favourite. “I wrote the song with Faraway George. We both resigned from our jobs and moved to the city to pursue a full-time career in the music industry. This move has not always been easy and takes more sacrifice and hard work than one would think. We wanted to share a story from the heart,” he says. “I think that listeners will be able to relate to the song, because at some stage all of us have to ‘busk’ to get somewhere in life. It is a good thing, because it lays a solid foundation and keeps you grounded. Some people only get one opportunity to follow their dreams, but nothing worthwhile has ever been easy.”

The album’s first feel-good single, Ek Glo, which was very well received and topped the music charts of radio stations, across the country, for several weeks. The music video was an instant hit, has been viewed by thousands of people on YouTube and is regularly featured on TV. “The song stems from a season where I had to take leaps of faith to fulfil my calling. Faith is what carried me through during this time. In a sense you could say that the song is an invitation to believe in a Creator that lays the path out for us and also to believe in the things that He placed within each one of us,” he says. “I wanted to write a feel-good song with a positive message that would inspire listeners to dance and be happy.”

Over the past few years, Len Muller has shared the stage with some of South Africa’s biggest stars, including Jan Blohm, Bok van Blerk, Dans Dans Lisa, Chris Chameleon, Jak de Priester, Francois van Coke, Andriëtte Norman, Dan Patlansky, Matthew Mole and Kaleidoskoop. He has also performed with Afrikaans Akoesties and at all the big music festivals across the country. His songs are regularly heard on the radio and he has also recently made name as a lyricist. OOG VAN DIE STORM is proof of how much he has grown as an artist and songwriter. He is busy creating a strong legacy in the music industry and all eyes are on him as he is systematically becoming one of South Africa’s most popular young artists.