Vibescout, an innovative start-up that provides event listings and city guides, is now listing movies showing on 690 screens in 94 cinemas across South Africa. Vibescout is now officially the largest movie aggregator in South Africa and continues to take the country’s entertainment scene to new heights. 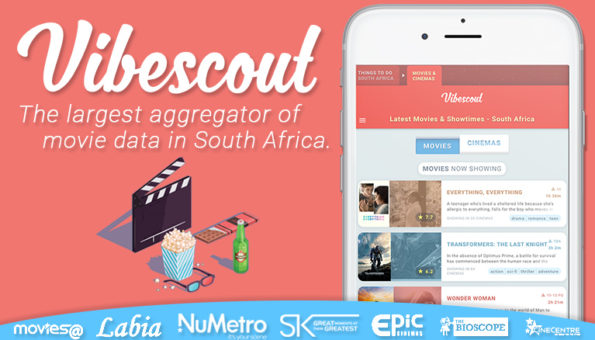 Cape Town, South Africa, July 5, 2017 – Co-founded in 2015 by brothers’ Paul and Jonathan Myburgh, Vibescout’s vision is to provide an easy-to-use platform used to smartly curate the best things to do near you. This is done through event listings, comprehensive go-to guides and now, movie listings.

The idea behind Vibescout was first born when Paul was travelling in Saigon, Vietnam in January 2014. After visiting all the regular tourist destinations, he scoured the hostel notice boards for more unique things to do and began to wonder how he could get better insight into truly local events and activities. After realizing there was definitely a void that needed to be filled in this space, Paul brought the idea back home to South Africa later that year and soon began work on Vibescout’s first version.

Vibescout officially launched out of beta and started providing event listing in October 2016; by April 2017 they reached over 100 000 users for the month! As of 27 June 2017, Vibescout became the largest movie aggregator in South Africa, listing movies showing on 688 screens in 94 cinemas throughout the country.

“It took roughly 6 weeks to get a MVP release and from it we have had amazing user feedback. We are currently getting nearly 10 000 users weekly using our movie section to find the latest movies and locate cinemas around them. We didn’t realize it at the time and such a goal wasn’t even on our radar, but we are now officially the largest movie aggregator in South Africa.”