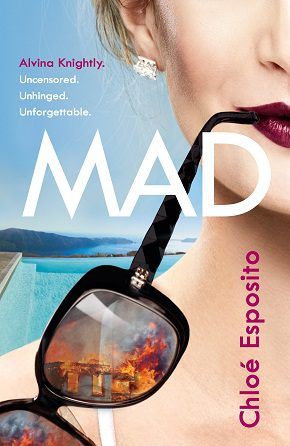 Mad is the first book in a trilogy featuring Alvina Knightly and her twin sister Beth. Alvina is bad, mad and dangerous to know, as you’ll find out. Beth has always been the goodie-two shoes but nothing goes right for Alvina. Even her organs are on the opposite side of her body, right instead of left. She is a mirror image of her twin, her dark shadow, which probably explains everything. Alvina is left-handed – sinistra – in Italian.
Alvina is living in what can only be described as a squat on the top floor of a Victorian house in London, which she shares with a couple of slobs who are always snogging. She’s having trouble paying off her credit card debt and works in a dead end job, but tells her FaceBook friends she composes Haiku for the Times Literary Supplement where she works as a poet. She also has a crush on Channing Tatum.

Beth meanwhile is living in the lap of luxury in Taormina, Sicily, after marrying an Italian millionaire, Ambrogio Caruso with whom Alvina has some history, and who inherited millions when he was just 13 years old.

Then Alvina gets an offer she can’t refuse: an invitation to Beth’s villa to meet her baby nephew Ernesto and Beth pays for her ticket, Club Class, of course. However, since the pair haven’t spoken to each other for a while, Alvina suspects that Beth has an ulterior motive.

She’s right and she soon finds out what it is.

The chapters are Sloth; Envy; Wrath; Lust; Gluttony; Greed and Pride, the seven deadly sins, so there can be no doubt what it is about.
Mad fully lives up to the taglines on the cover: uncensored, unhinged and unforgettable. Maybe not so much unforgettable. The storyline may be a bit far-fetched but Alvina’s escapades will keep you reading and chuckling. There are many comical episodes including one when Alvina attempts to get her battery operated sex toy through security. Mad ends on a cliff-hanger. So you know there’s more to come and I hope we don’t have to wait too long for Bad and Dangerous to Know, the second and third in the series.