When hearing the words environment, organic and vegan friendly, your mind almost automatically jumps to hippies wearing yoga pants, brightly coloured clothes and vegetable gardens in your backyard. However, being organic is so much more than just a stereotype. All over the world, individuals and enterprises alike are working hard to change this image. 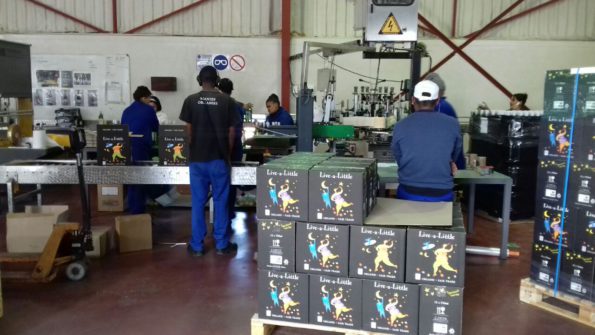 For the past few years, while a few businesses have shifted the way they operate in order to incorporate more environmentally friendly practices, others have made it a way of life. One such business is Stellar Organic Winery, who has championed a philosophy of not only giving back to the environment, but also giving back to their wine patrons, employees and immediate community.

Stellar Winery is situated at Kys Halte, just outside Vredendal, Western Cape, which borders the Namaqualand – the only semi-arid biosphere hotspot in the world. Innovation is one of Stellar’s strengths and since their wines first appeared on the market in 2003 they have broken new ground in both winemaking and social development.

Willem Rossouw, managing director of Stellar Winery, decided years ago to channel all his energy into not just creating another wine brand, but a wine label that is 100% organic and fair trade certified.

“Every winemaker is faced with two choices,” Willem says. “Which wine to make, and how to make it. Early on I decided I needed a niche to call my own.”

According to Klaas Coetzee, head winemaker, production manager and general arbiter of quality at Stellar Winery, the main health benefit of making organic wine is that there is no pesticide and herbicide used in and around the field and vineyards. This means that consumers will not be harmed by any chemicals or additives.

“Organic wine is not only healthier for your body; it is also better for the environment, because we use organic, responsible farming methods as opposed to conventional or outdated ones.”

Sustainable Wine South Africa (SWSA) says that organic wine has to be made from organically grown grapes and has to meet standards as stipulated by recognised organic certification agencies. The regulations, however, may differ from country to country.

“All organic wine is produced without chemical pesticides or fertilisers. In some countries, organic wine must be produced without the added use of sulphites,” says SWSA.
Stellar Winery is not just well known in South Africa. The winery also ships a wide variety of wine all over the globe. All their products are certified by Ecocert, a certification body for sustainable development in Southern Africa that inspects Stellar’s vineyards once or twice a year. Klaas also has a fellow viticulturist who visits the farms and the farmers that supply the organic grapes to Stellar Winery to make sure they follow all the correct practices for organic farming.

Stellar Winery’s bottles also wear the integrity and sustainability seal from the South African Wine and Spirit Board, which was implemented in 2010. This seal certifies that the wine has been produced sustainably, in an earth-friendly manner. According to SWSA, sustainability refers to “production that is environmentally responsible in a holistic sense and is about farming for future generations”.

“Out of a business aspect, people are definitely looking after themselves and the environment more, so if you can produce the same wine with the same quality at the same price level it will definitely have a marketing benefit because people will make the right choice by choosing the organic product above the conventional product,” says Klaas, Stellar’s head of production.

Not only is Stellar’s wine organic, it is also vegan friendly and gluten free. This is unfortunately not true of all organic wines.  According to Klaas, conventional wine-making methods implement proteins like gelatin and isinglass from fish and egg whites as fining agents when rounding and softening the wine. This is not allowed when making vegan friendly wine.

“Although it is more expensive, Stellar Winery uses protein derived from peas, legumes and potatoes in their fining process,” Klaas explains.  This ensures that vegan wine lovers can enjoy their wine without shame.

More than seven years ago, after Stellar Winery received their certification through Ecocert for fair trade as well as organic wines, there where more and more people asking them for vegan friendly options, according to Klaas.

“The natural movement was to make all our wines vegan friendly and not just make a specific range,” explains Klaas. “Another benefit of organic wines is that they also have lower sulfate levels than conventional wines.”

Stellar Winery also has a few special no-added-sulphur wine ranges, created in 2004. To qualify for this certification, the wine has to have fewer than ten parts per million of total sulfates. “The reason for this is because if you make wine with yeast, the yeast can also produce natural sulfates and it can normally be more than is allowed,” says Klaas.

“The trick is to continuously monitor your yeast and use specially selected yeast which does not produce a lot of sulfates. This will ensure that there isn’t a lot of natural sulfates in the wine,” Klaas explains.

According to Willem, organic farming is more sustainable because it creates an ecosystem in the vineyard which is self-sufficient and self-regulating.

“It doesn’t just produce wine that’s better for the environment – it has a real added benefit for your business,” says Willem.

For more information about Stellar Winery, visit their website at www.stellarorganics.co.za