The biggest, wildest and most unforgettable year end party is set to hit Johannesburg with the insanely funny, high energy, feel good smash hit musical stage production of the year: Rock of Ages. 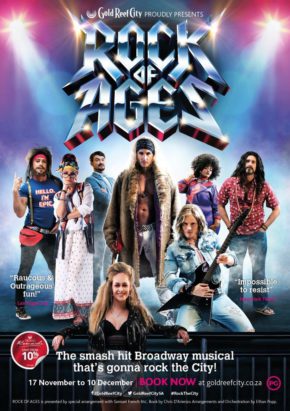 It’s a sing-along, dancing-in-the-aisle, party show with tons of humour, all supporting a charming love story! The South African premier of this multi Tony award-nominated Broadway musical will be live at Gold Reef City’s Lyric Theatre from Friday, 17 November to Sunday, 10 December 2017.

Having spent six years on Broadway, Rock of Ages then went on to Las Vegas, a nation-wide tour of the U.S. as well as productions in Tokyo, Toronto, Sydney, Mexico City, Panama City, Manila, Malta, Singapore and now, Gold Reef City, Johannesburg!

Featuring 28 nostalgic rock anthems including the music of Pat Benatar, Styx, Twisted Sister, Poison, Foreigner, Reo Speedwagon, and more, Rock Of Ages pays homage to the big rock concerts of the 80’s. It takes audiences all the way back to 1987 to the fabled West Hollywood club, the ‘Bourbon Room’, set on LA’s infamous Sunset Strip. The musical tells the story of Drew, a city boy from South Detroit, and Sherrie, a small-town girl, who have both landed up in LA to chase their dreams of making it big. Rock of Ages celebrates a time when big glamour rock bands were the epitome of decadence, superficiality, oversized egos, never ending guitar solos, extreme clothes, and outrageous hairstyles!

“At the core of Tsogo Sun, lies the innate desire to create experiences with top quality entertainment. Rock of Ages is an energetic tribute to classic rock which we believe Johannesburg audiences are going to love. It definitely will take you down memory lane with songs like ‘We Built this City’, ‘I Wanna Rock’, and ‘Don’t Stop Believin’, to mention only a few…It’s going to be one of the biggest year-end parties of 2017, and under the direction of Elizma Badenhorst, and Executive Producer Jaco van Rensburg, Rock of Ages is guaranteed to blow audiences away,” says Noeleen Bruton, Director of Marketing for Tsogo Sun.

*Not suitable for persons under the age of 14.

Tsogo Sun is the leading hotels, gaming and entertainment company in South Africa, providing a variety of hospitality and exciting entertainment and leisure experiences. Combining an established heritage with a professional and energised approach, the group proudly encompasses 14 casinos and over 100 hotels in South Africa, Africa, the Seychelles and Abu Dhabi.