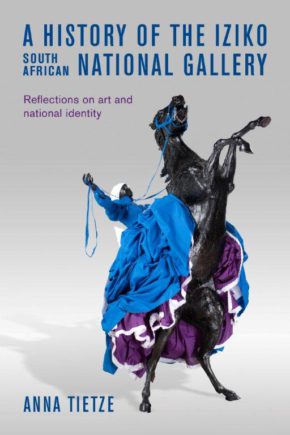 Reflections on Art and National Identity

Anna Tietze’s work has been published at the right time: when the debate over colonialism, anti-colonialism and post-colonialism, is raging fiercely in our country – from the hallowed halls of academia –  down to primary school where anti-colonialists are proposing to rewrite history.

One of the big questions post-democracy (and in the run up) was: “how could the nation and its institutions change themselves radically to meet the needs of a black population impatient for political, cultural and social representation?”.

It was a sensitive question and it still is. In 1990, Marilyn Martin, the then director of the Gallery addressed transformation by shifting focus to three areas: a broader acquisitions and exhibitions policy; more transparency and power-sharing in the administration of the Gallery; and an increased bid for public consultation in the planning of and response to exhibitions.

The objectives were to acquire “South African art”, as well as international, particularly African, and Western European works of art, to demonstrate significant trends in the visual arts in South Africa.

But it wasn’t as easy as it sounds. There were clashes with significant stakeholders over various issues, including who was going to fund the 1991 Cape Town Triennial. The Rembrandt Van Rijn Foundation had been sponsoring it since the early 1980s.

So what does the future hold? Tietze postulates that the Gallery looks to position itself between two opposing forces: on one hand there are calls for Iziko Museums to promote a view of (black) African heritage. On the other there is the insistent call for the present, represented by the Zeitz Museum of Contemporary Art Africa (at the V&A Waterfront).

This museum, according to Tietze, poses a huge challenge to Iziko, not least because the founder Jochen Zeitz, the former Puma CEO, has plenty of funding for further purchases of African contemporary art.

Art being art means that beauty or otherwise is in the eye of the beholder.

Tietze uses Michaelis graduate, Deon Hutton, as an example. When he showed his installation, Fuckwhitepeople wall, which was part of a larger display, The Art of Disruption, a storm of controversy raged over his work.

I visited the exhibition and understood Hutton’s piece for what it was, a work of art.

However, Jack Miller of the little known Cape Party, claimed it was hate speech and an incitement to violence and he went to court over it. Basically, the judge found that the work was freedom of expression; was not hate speech and did not incite violence.

So art, whether you think it is art or not, resonates with everyone, even if you’re a politician looking to score points with the electorate. Miller, a UCT alumni, is a candidate in a by-election being held in the Milnerton, Cape Town area, on Wednesday August 2.

She examines the ways in which the Gallery has understood its social function, from its modest beginnings in the 1870s. She also looks at its relationship with other galleries and the consequences unintended or not, for its collecting and exhibition practices.

The central question is: “What belongs in a public art museum or gallery? How does a national gallery understand its relationship to the nation and the nation’s art and whose art is it reflecting? Tietze answers her own questions but the book will lead to a lot of debate whether you agree with her conclusions or not.

Tietze, a cultural and art historian at the Michaelis School of Fine Art, University of Cape Town, has produced a scholarly work which could have been as dry as the dust behind long-hanging old pictures.

But it is not. It is written in plain English and brings to life the arguments and battles over what should and shouldn’t be exhibited.

The Abe Bailey bequest exhibition is one example, and here race reared its head when the debate raged, including in the media, which involved “quite a bit of rewriting the Gallery’s history”. Raison Naidoo, a practising artist and graduate of Wits was appointed the first black director of the SANG and succeeded the outspoken Martin who had been there for 18 years. Naidoo replaced the Bailey Bequest exhibition with another large retrospective: 1910 -2010: From Pierneef to Gugulective, to coincide with Soccer World Cup.

A History of The Iziko South African Gallery is not just a book for the experts, it will find resonance with the average reader who is interested in art. It is a valuable addition to the many books on South African history which have been published since the birth of the Rainbow Nation.

Historic Black and white and full colour images abound. The cover illustration is by Mary Sibande, The Reign (2010) from the Iziko South African National Gallery.