Experience Oktoberfest without travelling to Germany! 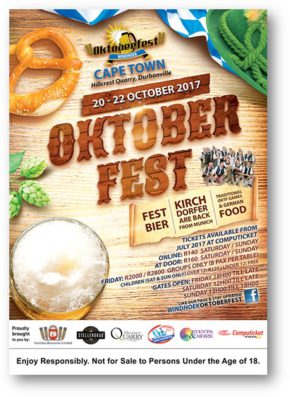 Due to the enormous popularity of the 2016 Windhoek Oktoberfest, Namibia Breweries and Events and More have decided to run this year`s festivities over the whole weekend from Friday 20th to Sunday 22nd October 2017.  The weekend promises a perfect combination of excellent Namibian Beer, great German food, games & activities and world-class entertainment. Friday night is for over 18`s only and on Saturday and Sunday you can bring your kids for a great family day out.

Oktoberfest is the world`s largest beer festival, celebrated annually in Munich, Germany. The first Oktoberfest was held in the the year 1810 in honour of the Bavarian Crown Prince Ludwig’s marriage to Princess Therese von Sachsen-Hildburghausen. Over the centuries it has grown to be one of the most important traditional festivities in the Bavarian culture. Other cities across the world also hold Oktoberfest celebrations that are modelled on the original Munich event.

Here in South Africa, one of the most incredible venues in Cape Town, Hillcrest Quarry in Durbanville Winelands, will play host to the official Windhoek Oktoberfest Cape Town brought to you by Namibian Breweries.   The opening night on Friday 20th 2017 will be sold per table of 8 and is ideal for team building, a special client event or just getting a group of good friends and family together for a fun filled experience.  Saturday 21st and Sunday 22nd October 2017 will be family days with extra activities available for the kids.

The opening of the keg will take place on Friday night. With the exclamation “O`zapft is!” (“It`s tapped!”), the first beer is handed to the mayor or representative of the city, who then declares the Windhoek Oktoberfest in Cape Town officially open.  This is a special “Festbier” available which is brewed specially for the Oktoberfest by braumeister Christian Müller.  This authentic German beer is brewed according to the Reinheitsgebot, the 1516 Bavarian Purity Law.

The Kirchdorfer band will be performing:

Schuhplattler is a traditional style of folk dance. In this dance, the performers stomp, clap and strike the soles of their shoes (Schuhe), thighs and knees with their hands held flat (platt).

It’s hard to compete with hearty melt-in-your-mouth German dishes which complement your beer perfectly.  Hartlief, well known for its comprehensive variety of high quality meats will be serving up traditional specialities bringing the taste of the Munich Festival right to your door-step.  Look forward to traditional Eisbein, Bratwurst mit Sauerkraut und Senf and roast chicken to mention a few.

Saturday and Sunday will also include performances by The Kirchdorfer band and Schuplatter Dancers, as well as performances by another two traditional bands that will be playing contemporary German tunes. Typical to a traditional fair, there will also be lots of games including “Stamm-sägen” (Log-Sawing), “Bierstemmen” (Beer-Lifting), “Hau den Lukas” (High Striker), Nageln, Beer Pong and Catty shooting.

Book tickets for Friday, Saturday and Sunday at Computicket:

The opening night on Friday 20 October 2017 is for over 18’s.  Bookings are for groups of 8 people per table only. There are 2 different packages on offer:

Includes a 1LT branded beer mug per person, a snack platter comprising of traditional meats, cheeses and breads on the tables and access to a waitron

Saturday 21st October and Sunday 22nd October 2017 are family days. Tickets for Saturday and Sunday are R140 online and R160 at the gate.

Kids under 12 free entry on Saturday and Sunday.

If you book through Computicket http://bit.ly/WindhoekOktoberfestCapeTown-mobi

you will automatically stand a chance to win an all- expenses paid trip to the Windhoek Oktoberfest 2018 in Windhoek.  The prize includes flights, accommodation, and entrance to the Oktoberfest.