The Lady May, Glenelly’s flagship estate wine named in honour of Glenelly’s Grande Dame, May-Eliane de Lencquesaing, is an exceptionally graceful and stylish Cabernet Sauvignon with a dash of other Bordeaux varieties. 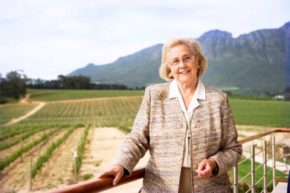 It is naturally fermented and matured in new French oak for 24 months. Elegant and complex, the wine develops flavours of cassis, blackcurrant, dark cherry, raspberries and delicate spicy plum. The wine displays an exquisite structure, seamless oak, velvety tannins and a silky savoury finish and has a very good aging capability of 12 to 18 years. A sculpture of Madame de Lencquesaing by Maxime Real del Sarte (1948), a wedding gift, is depicted on the Lady May wine label.

Accolades: This highly acclaimed Cabernet has received many prestigious awards, including a pinnacle 5-star rating for the 2009 vintage in Platter’s wine guide. The 2011 Lady May received a 92 point rating in Wine Advocate, 93 points in Wine Enthusiast and 95 points in Tim Atkin’s South African Report.

Lady May 2012, with brand new packaging, will be released towards the end of 2017

The name and concept of the estate’s flagship Cabernet remain the same. However, the new packaging makes for a stronger identity, incorporating gold foiling on a dark brown background with the handwriting of May de Lencquesaing. The capsule is gold tin and embossed.

Madame May-Eliane de Lencquesaing is a member of one of Bordeaux’s oldest wine families, the Miailhe, who owned the famous Château Pichon Longueville Comtesse de Lalande, Grand Cru Classé, Pauillac, Bordeaux. Her pursuit of excellence at Château Pichon Lalande over 30 years saw the wines being elevated to some of the best in the world and led to Madame being awarded Decanter Magazine’s Woman of the Year in 1994, among several other prestigious accolades. She also established a Glass Museum at Château Pichon Lalande housing one of the biggest private collections of hand-blown glass. May de Lencquesaing was recently honoured with a Lifetime Achievement Award at the 2017 International Wine Challenge Awards.

May’s wine journey continued in South Africa with the purchase of Glenelly Estate in 2003 at the age of 78, where she replanted the former fruit farm to pristine vineyards, built a state-of-the-art winery and tasting centre, and began producing a highly-acclaimed range of wines. In 2007 Madame sold Château Pichon to Roederer Champagne and has since devoted her time to the development of Glenelly.

Why after 30 years in the wine business in France, did Madame decide to plant vines in South Africa? “I bought Glenelly because I believe in South Africa’s soil, microclimate and potential for quality wines, and I wanted to continue the French heritage of winemaking in South Africa that goes back more than three centuries. I have every confidence in this great country and its people, and wish to play a part in its economic development”, says Madame.

Today, 14 years after she purchased Glenelly, alongside her two grandsons Nicolas Bureau and Arthur de Lencquesaing, the 8th generation of vintners and wine producers, they are reshaping what was already a great success. Glenelly is moving forward. After closing to the public for a year due to extensive renovations, the Stellenbosch estate re-opened as a world-class winelands destination including a hospitable bistro, a tasting room with spectacular views and a new presentation of Madame’s unique glass collection. Launching a series of new vintages across the range, the team took the opportunity to refresh the brand, creating a clearer, more distinctive identity that better conveys the three key elements that define these award-winning wines: power, elegance and balance.