One of the great ladies of Champagne. 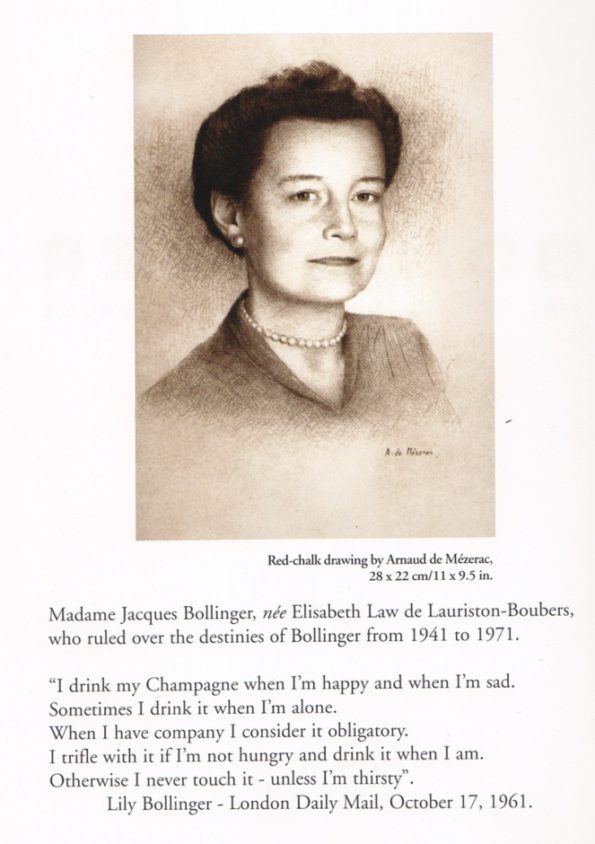 When she married Jacques, Elisabeth (Lily) embraced, with verve and passion, Champagne and the vineyard. In 1941, when her husband died without an heir, the young 42-year-old widow took up the reins without hesitation. Known as “Mrs Jacques” to the villagers of Aÿ and “Aunt Lily” to the family, Elisabeth Lauriston Bollinger was considered by all as one of the great ladies of Champagne. She saw the House through the war and German occupation bravely and firmly and then from the 1950s represented Bollinger wines across the world with her now famous elegance, determination and several noteworthy quotes.

For thirty years, she guided the House she had inherited between tradition and modernity, with intelligence and subtlety. It was she who took the decision to launch Bollinger R.D. in 1967, followed by Vieilles Vignes Françaises in 1969.

Madame Bollinger stood down as head of the company in 1971, and died on 22 February 1977, leaving the House with her stamp of an unquestionably great lady of Champagne.

There really is a lot that’s special about Bollinger’s Brut Special Cuvée, an icon among non-vintage Champagnes. That’s why it has become the signature bottling of the Bollinger estate, one of the world’s most revered Champagne houses. It is a blend of the three Champagne varieties, 60% Pinot Noir, 25% Chardonnay and 15% Pinot Meunier, from mainly Grand or Premier Cru vineyards, symbolic of exceptional quality. It also includes ‘reserve’ wines from previous vintages to add flavour and weight to this sophisticated blend. 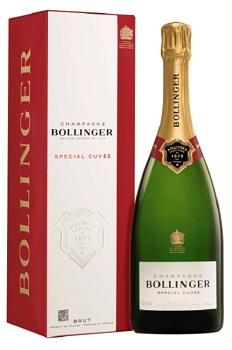 To the nose: a beautiful aromatic complexity; ripe fruit and spicy aromas; hints of roasted apples, apple compote and peaches.

To the palate: a subtle combination of structure, length and vivacity; bubbles like velvet; pear, brioche and spicy aromas, notes of fresh walnut.

This really is an absolutely fabulous Champagne that can be served for afternoon tea, at a picnic, as a pre-dinner drink and is an ideal accompaniment to sushi, prawns and crayfish, good cured ham or sliced, seared beef fillet.