An icon of the struggle against slavery and wife of Muratie’s first owner. 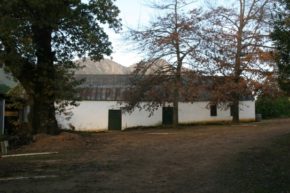 At Muratie, the passion for preserving the estate’s rich heritage and the intriguing human stories woven into the very fabric of its centuries old history, are captured in every nook and cranny of this family farm, where the unique old-world ambience is almost tangible. Even the wines reflect a tangible sense of time suspended. The Melck family has honoured the estate’s fascinating history by naming all Muratie’s Iconic Wines after extraordinary characters from the farm’s colourful past, each with its own enchanting story described on the back label. And there are a myriad stories reaching as far back as the 17th century, making Muratie one of the oldest wineries in the Cape Winelands.

Muratie Ansela van de Caab, the estate’s flagship Bordeaux-style blend honours Ansela van de Caab, whose remarkable story is written into South African folklore as an icon of the struggle against the horrors of slavery at the Cape in the late 17th century. Born in the slave quarters at the Castle, this little slave girl only had a Christian name, her surname being “van de Caab”, Dutch for “of the Cape”, as was the case with all slaves born at the Cape at the time. The first owner of Muratie, a passionate and determined young German soldier called Laurens Campher, fell in love with Ansela who was a slave-girl at the Castle in Cape Town. During their 14 year courtship, Laurens frequently walked the 64 kilometres to Cape Town and back, a three day trip, to see his beloved Ansela. When she was eventually emancipated, Ansela returned as Laurens’ wife to Muratie. The oak tree Ansela planted to bless their marriage still stands on Muratie, as does a small white house, their first home, built for them by Laurens.

The Muratie Ansela van de Caab is a classic Bordeaux-style blend of Cabernet Sauvignon, Merlot and  Cabernet Franc. The Cabernet Sauvignon gives the wine a structured backbone, which is enhanced by the Cabernet Franc, with the Merlot adding the upfront fruit flavours. Dark, intense and brooding, the nose promises much – cedar wood, cigar box, blackcurrants and a distinctive herbaceous and spicy edge courtesy of the Cabernet Franc – and the palate more than delivers on that promise with rich, savoury flavours of black olive tapenade, cassis, some perfumed sandalwood and a long finish which develops from fruit to savoury, and ends with an enticing combination of the two. This wine epitomises balance, with the elegant tannins, fresh acidity and masterly oak treatment all playing their part. This is a wine to savour with the very finest culinary offerings, or simply to be enjoyed with good friends.

The vines: The wine, Ansela van de Caab, is produced from the estate’s best vines, which were originally carefully planted to make this specific wine.

In the cellar: The varietals for the Ansela were all hand-harvested, sorted, crushed, destalked and fermented in classic open fermenters.  Malolactic fermentation took place in French Oak barrels.  After 18 months of barrel maturation, the varietals were individually tasted and selected for the Ansela blend.  This blend was re-introduced into French Oak for a further 6 months to ensure that a good marriage took place between the varietals.

Ageing Potential: Can be enjoyed now, or up to ten years from now.