Mommies and Daddies, prepare yourselves for lots of fun and laughter as you watch your child fall in love with the KLIKKERLAND gang! 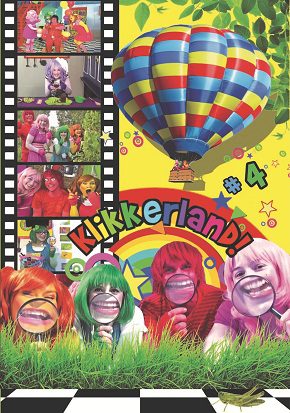 Because Huppel Hoepel, Boebel Babbel, Woepel Wappel, Rimmel Rammel, Tink Tinkie and Liela Loela are here to stay! The Ghoema nominated (Best Children’s Album or DVD) children’s series, KLIKKERLAND, with its colourful characters and fun educational approach, has been conquering the hearts of children since the release of its first volume in 2013. The fourth instalment of this exciting programme has just been released and promises to build on the quality musical entertainment, which made it famous and to attract audiences of a broader demographic.

The latest release covers a wide variety of modern and exciting topics, ranging from the importance of insects to the magic of the imagination. It also contains playful song and dance numbers, DIY-projects, food and fieldtrips, which immediately resonates with audiences of all ages. “KLIKKERLAND has grown from three to six characters. With each release, it gets easier to create and write episodes, because we learn more about what works and about the needs of our audience. Our music is fresh, upbeat, and easy to sing along to. The characters also have a lot of fun and viewers can look forward to brand new pranks by Rimmel Rammel. The program now also boasts an English member with fuller programmes and more features,” says Marinda Fourie, one of the founding members of this project. “The new storylines are fun and the themes are modern. Parents will also like our cleaning episode and children will enjoy making recycled items,” adds Carina Beukes, the second member of this dynamic duo.

KLIKKERLAND was born in the heart of the Garden Route when a group of likeminded artists, with a passion for children’s theatre, met at the Oakhurst Insurance George Arts Theatre and decided to create an educational series for children aged between three and nine. Currently, the theatre is also home to the KLIKKERLAND set. Songs were set, scripts were written and colourful characters were developed. The characters were carefully planned to represent various personality types. Even the character names were chosen to help little tongues practice the pronunciation of difficult sounds, making it relevant to non-Afrikaans viewers. Huppel Hoepel is very kind and will go out her way to help others, while   Boebel Babbel is more mischievous and loves computer games. Woepel Wappel is obsessed with exercise and travelling and is afraid of the dark, while Rimmel Rammel likes playing pranks and is also the musician of the group. Tink Tinkie is the shy clever one who loves to read and educate and Liela Loela speaks English and loves cooking. With these cute characters in place, a lot of help and favours, the first DVD of the series was recorded. “We wanted to ensure that the product would be suitable for children in the intended age group and went to a lot of trouble to test all aspects of the project with these kids. Even the name had to represent an imaginary world where anything is possible and children could lose themselves in an adventure and fall in love with the characters,” they share.

Volume 1, which mainly focuses on pets and facing fears, was an instant hit. The second release followed soon thereafter and took viewers on a fieldtrip to a dairy farm and illustrated health from exercise. Each DVD consists of two thirty minute stories as well as theme related educational music videos. After one of the original creators of the show had to relocate and had to withdraw from the production process, it was up to Carina and Marinda to regroup and complete the rest of the series.

In the third release of the season new characters were introduced, while Rimmel Rammel went swimming with the sharks. This is also the series’ biggest success story as it was nominated for a coveted Ghoema Award in 2017. “We develop each episode ourselves, do research on each topic, address relevant issues and also keep educational syllabus in mind. Every episode is brainstormed and ideas are exchanged until everyone is satisfied. The themes are important, because they address issues children deal with on a daily basis. It will therefore, also assist children in expanding and improving their Afrikaans vocabulary and pronunciation. We want to entertain children, make them move and put a smile on their faces.”

The KLIKKERLAND experience is not limited to DVD’s, but can also be experienced as a stage production allowing fans to meet their favourite cast member in person. The production has also been featured at some of the biggest festivals in the country, such as The Knysna Oyster Festival, Woordfees, Bloeiselfees, George Show, New Castle Winter Festival, Diaz Summer Festival, Afrikaans Gaan Klein, KKNK and Innibos. They will also make an appearance at the Kierieklapper Arts Festival, East Rand Expo and many other functions, later in the year. A CD, containing the music from the first four DVD”S, was recently released, as well as a music video compilation. The content of the first three DVD’s was divided into different episodes that can be seen on kykNET daily as part of their children’s programming.

The KLIKKERLAND GANG has a lot of plans and goals for the future, including the release of DVD 5 and 6 of the series. “The new material will follow the usual recipe of music, crafts, pranks, stories, jokes and now also experiments and viewers can also look forward to brand new upbeat rhythms. We want to introduce KLIKKERLAND to the South African public and spread the positive message of each character. We want to enable children to play, dance and learn to be comfortable in their own skin.” The duo would also like to share the stage with Elvis Blue and Carike Keuzenkamp one day and tackle a charity project with Bobby and Karlien van Jaarsveld.

KLIKKERLAND’s educational DVD’s are available from selected music outlets, such as Musica and are distributed by WOW Music Distribution.