Tune in to RSG on Friday 11 August from 20h00 to 21h00 for an exclusive live performance of the new songs. Karen Zoid and her band will be performing all the tracks from the new album in studio at SABC in Seapoint. 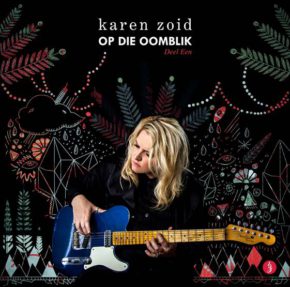 “The entirety of our life is a series of moments.”  Every track on Karen Zoid’s latest album adheres to robust songwriting principles. The tone switches dramatically between classic rock arrangements, powerful ballads and deeply moving compositions. The songs on the album touch nerve and heart.  Zoid’s super-charged rock energy and her ability to write gorgeous, delicately rendered songs have captured TV and stage audiences alike.  This EP consists of six brand new Afrikaans tunes, as well as a bonus track – a live recording of “Giant Mistake” with Parlotones front man, Kahn Morbee.  This is the first release of three different chapters in Zoid’s songbook.

Zoid and her band, Schalk van der Merwe, Henry Steel and Tim Rankin have been playing together for seven years now. In 2016, they started working with pianist Kyle Petersen. Petersen also co-wrote the track “Vir Jou.” This is the first single off the album and will be available from iTunes from Friday 4 August. Zoid says that the song is a love song for adults. She believes that true love can only be appreciated by someone who has done a few hard miles in this life. She says: “we all learn that life is not really about our own little worlds, yet the presence of Love makes it evident to me that we are not alone in this universe.”

Even though the music industry is currently in a “drop -a- single” era, Zoid still finds the making of a full album most fulfilling. She says: “I want to feel part of this current era rather than to try and go against it. Everything seems to have a more immediate effect because of online platforms. And this is not only in music, but the way of the world in general. Someone says something in America and it affects the whole Middle East. Instantly. The process of my writing usually entails creating twenty or thirty songs and from these I choose the “best” twelve. But with these songs I decided to complete the first few songs I wrote and recorded it immediately. I wanted to capture the immediacy of moments, though I know it’s mostly impossible. I am trying. I want to explore and fully experience it.”

Apart from the release of the album, there are also two more exciting dates to look out for:

On 20 August kykNET and Showmax will be broadcasting a Karen Zoid short film.

Zoid will make South African music history again on 24 August when she will be the first SA artist to release a visual album on iTunes. There will be seven videos in total. International artists who have released similar visual albums include Beyonce, Drake en Brad Paisley.

The new album was recorded at Bellville Studio,  produced by Theo Crous and mastered in Los Angeles.

Karen Zoid and her band will be performing the album live on RSG from SABC studios in Seapoint on Friday 11 August between 20h00 and 21h00. Tune in from 20h00 on 100 -104fm or DSTV channel 813 for this exclusive live album launch.