The #datamustfall campaign is dangerous populist disinformation that has government ministers, ICASA and the communications portfolio committee trying to force price control on the private sector, based on a social media campaign and a false meme. That the meme was deliberate cherry picking, seems to have been lost on much of the media and public. 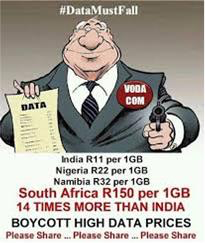 Facts have become irrelevant, inconvenient and ignored. Yet again, government is rushing headlong to introduce more regulation without a clear understanding of what drives the data market and of the unintended consequences of misguided interference. There is indeed scope to reduce data prices – if government relaxes regulation, allows free competition and releases more spectrum. Price control is not the answer, nor is the proposed Wireless Open Access Network (WOAN).

The facts behind #datamustfall meme:

The reality is that there are too many variables to make simple price comparisons across countries. Prices vary from zero to hundreds of rands, from regional or national providers, from once-off packages to contracts, from in to out of bundles, from voice to text, and so on. Other factors affecting data prices include country size, population density, coverage, geography, regulations, subsidies, licensing fees, spectrum availability, quality and level of development.

Factors specific to SA include:

There is no such thing as a free lunch, so costs associated with “free” data must be passed on to consumers. Data is not a public good or a human right. Vodacom and MTN between them have spent around R20bn over the last year or two on new infrastructure. That money comes from profits. No profit, no infrastructure. Data traffic and innovation continue to explode, demanding continued and significant capital investment.

There is no concrete evidence of anti-consumer collusion. In the communications market, the greatest (but not necessarily sole) culprit is government regulation and the Wireless Open-Access Network (WOAN) proposed by the ICT Policy White Paper will make it worse.

The WOAN is an effective nationalisation of the telecommunications infrastructure. In nationalised industries, as in the case of South Africa’s electricity market, prices tend to be high as the state-enforced monopoly can charge whatever it wishes without having to worry about competitors undercutting it.

A WOAN might create the illusion of lowering data prices in the short-term, as government might artificially force the price down through price control. Prices will, however, drastically rise, as the government infrastructure monopoly is unable to expand quickly enough to meet market demand, or adopt latest technology in the fastest developing area. It will fail along the lines of Eskom’s inability to expand, leading to declining supply, and SAA’s inability to correct management chaos. Such failings are virtually unheard of in the private sector where the market demands efficiency.

SA’s extraordinary penetration, growth and coverage is arguably our greatest post-1994 success story. Over 95% of the population enjoy network coverage, ahead of some of the world’s most advanced countries. There are more active cell phones than citizens. It isn’t broken. Don’t fix it.

How to cope with driving in neighbouring countries