Geraldine Scholtz, a talented young singer with a bubbly personality, is definitely starting to make a name for herself in the music industry. Her first single, SOMMER, has just been released and is bound to top the charts and conquer the heart of music lovers across the country. 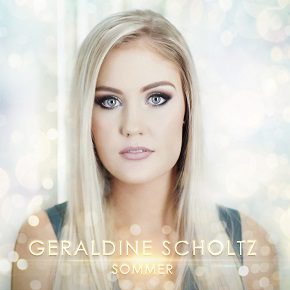 SOMMER is a pop song, written by Johan Oberholzer and produced by Murray Lubbe (The Hit Factory), about a girl who is in love with someone who does not notice her. The song complements the newcomer’s strong voice perfectly and will resonate with audiences of all ages.  With hits like Af en Af, Laaste asem, Vat my hoër, My alles and a total of more than a hundred number one titles on national and international radio stations, Johan has established himself as one of South Africa’s most productive and successful songwriters.  “Sommer is a very special song for a very special and talented young lady.  Geraldine is most definitely a fresh new voice in the industry, especially because of her ability to play instruments and charming personality on stage,” he says.

“There are so many people who want to be noticed by someone special. I explained to Johan exactly what I wanted the song to be about and he cleverly crafted my emotions into catchy lyrics. I find that it is more authentic to sing about real feelings and experiences. The song is very special to me, not just because of the meaning, but also because I can call it my own,” Geraldine gushes about her latest achievement. “My music is honest and I share my heart with fans. I always choose songs that I am able to relate to or that represent something that I believe in. My goal is to bring something new and fresh to the industry, which everyone will be able to enjoy.”

Geraldine currently resides in White River, in the Lowveld, but makes regular trips to Gauteng for performances. She has been singing, with her hairbrush as a microphone, since she was a little girl. Because she did not take part in sport, she auditioned for her primary school’s choir, which is where her love for music officially started. Piano and guitar lessons as well as vocal coaching followed soon afterwards. She also started competing in Eisteddfod competitions and achieved great results. Although she used to sing opera in the early days of her career, she decided to pursue a career in pop music when she started high school and has been dreaming about sharing her talent with the world.

Her career started gaining momentum after meeting with Bobby van Jaarsveld’s mother and manager, Ronel Brink, who confirmed that she definitely has talent after listening to one of her performances. Since then, she has become one of Bobby’s opening acts and has performed at some of the biggest festivals and concerts in the country, including Innibos. She can also be seen at Aardklop, later this year.

If she had to choose a different career, she would have considered to be a lawyer, because she enjoys arguing and always has her facts straight, but she also admits that she is happier about where she is now. When at home, she enjoys reading, watching movies and putting her musical abilities to the test in her home studio. She enjoys listening to a wide variety of music, but lists Celine Dion and Taylor Swift as her biggest inspiration.

Her parents support her in everything she does and always have her best interest at heart. The artist has a lot of plans for the future and would love to record a song with Bobby van Jaarsveld someday. “Currently, my dream is to release my first album and many more after that. I want to be a world famous singer and have worked very hard these past two years to share my own music with the world. I cannot be happier about my debut release. I have been singing for twelve years and there is nothing else I would rather be doing,” the singer explains.

The industry has taught Geraldine to be positive and thankful for each opportunity that comes her way. She believes that music is a piece of art that goes through the ears to the heart, which is something she would also like to achieve with her own songs. SOMMER is the perfect combination of heartfelt lyrics and catchy melodies and showcases her unique vocal ability. If this hit is any indication of what she has planned for her career, this musician surely has a very bright future ahead of her.

Sommer is also available on iTunes