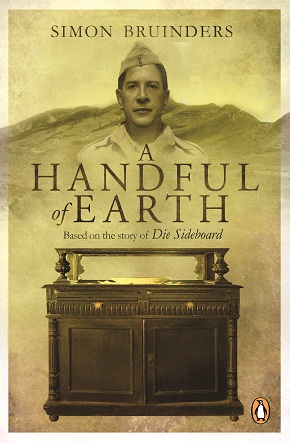 The more things change the more they stay the same.

Promises become as bitter as an old, dried-out tea bag,  when they are broken. Not once but time and time again. This is the fate of Abraham de Bruyn and his schoolteacher wife, Stella.

The story starts in October 1939 when the world is at war but Abraham is picking tea high up in the Outeniqua Mountains. Although he has a job as a carpenter in George, he lives on a rented plot in the Saasveld, still single, with his mother, Miena, a midwife, although he hopes Stella Figland will accept his marriage proposal. Which is why he is picking tea: he gets as much as four shillings a bag from the co-op. The extra he earns from his picking expeditions goes into a trunk under his bed and when he has saved a pound he puts it in the post office. Picking tea is hard work, the rocks are sharp and safe footholds are few and far between. But his perseverance is typical of the man’s determination to succeed.

Abraham is planning to use the money to build a house for himself and Stella, on his own plot, where he can grow his own produce. While Abraham is in the mountains Miena helps to deliver a healthy boy, a son for Gert Venter and the first grandchild for his father, Koos, both dyed-in-the-wool Afrikaners. But Kobus, their brother and son, has views that are diametrically opposed to those of his family and which causes a lot of friction.

When Jan Smuts promises the coloured soldiers they will be given plots as a reward for serving their country Abraham enlists against Stella’s wishes. But Abraham believes it is a dream come true and is convinced that this time he will get a plot of land to call his own.

The illiterate carpenter has felt the prick of forced removals previously when he and his family, and other young men, were moved from their land at the foot of the Outeniquas where they had farmed for generations, to The Island. Abraham is confident that Smuts will keep his promise, but Stella is sceptical.  Abraham, his brother, Stanley and Kobus, who is now estranged from his family, enlist and go off to war, to North Africa – Abyssinia – to fight the Italians. In an Ethiopian home Abraham sees a beautiful hand-carved sideboard which becomes a symbol of hope for him and his family. Abraham is seriously wounded at El Alamein and sent home.  Where he is betrayed again by the whites and Smuts when he learns that there is no land for coloured soldier (all they get is a bicycle and an army greatcoat), and he carves a sideboard, much like the one he saw in Abyssinia, and it takes pride of place in his home. But there is a fire and Abraham and his family manage to save the sideboard and with the help of neighbours and friends the house on The Island is rebuilt.

Then the De Bruyns feel the jackboot of the National Party and in 1950 have to move again: their church is demolished and there is no room for the sideboard in the new house, where they have been forced to live and it is sold for a measly R30. The sale and broken promises do something to Abraham’s soul and he is sent to Valkenberg in Cape Town, where, after treatment, he returns to their home in Conville.

Abraham is still determined to fight for his own piece of land and when the Labour Party wins an election in Pacaltsdorp he is allocated a plot of land in Delville Park for former soldiers of the Cape Corps.  And 31 years after Stella taught him, Abraham signed his name, A de Bruyn, with the fancy line underneath, on the papers. “The plots may not have been the ones promised after the war, but Abraham and Stanley grabbed the opportunity with both hands”, and as Stanley wryly says, ‘If you can’t get the chicken, eggs will have to do’.”

The Venters, Kobus and his wife Karin, are still living on The Island, now called Panorama, getting used to their new white neighbours. Then Karin sees the Sideboard on auction.

A Handful of Earth, which was first published in Afrikaans as Die Sideboard, is a beautifully written story and touches on a little known chapter of South African history. It is a poignant novel with many emotional moments that will tug at your heartstrings from page 1 to the unexpected climax. It is also a story filled with hope.

The book was translated by Belinda Jackson and it doesn’t lose any of the flavour Bruinders had in the Afrikaans version.

Bruinders was born in George to a family of teachers and he has been an actor for more than 30 years and has appeared in many TV series including 7de Laan and he has written several stage plays and pieces of industrial theatre.