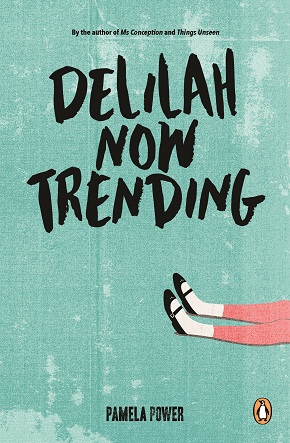 Did she do it? Or didn’t she? That’s the burning question in this black comedy, which, although poses serious questions about social media, will have you roaring with laughter or chewing your finger nails to the quick until you find out whodunnit.

Daisy Brown, a talented and popular 12-year-old pupil at Hill House, a posh prep school, is accused of seriously injuring Rosie Roberts, by tossing her over a balcony, when, against everyone’s expectations, she (Rosie), is appointed head girl.

That’s the plot which features an amazing array of over-the-top but believable characters: Daisy’s mom, Delilah “Lilah” Darlington-Brown, still recovering from an acrimonious divorce from Christopher who is too afraid to come out of the closet, “no relation to Uncle Gweezy”, Henry Mantashe, Lilah’s business partner in their successful coaching clinic, who is right out of the closet and not afraid to flaunt it; Portia, the housekeeper, who, to be kind, is work shy but who will do anything to protect Lilah and Daisy; and Cass, the formidable lawyer and Lilah’s best friend.

These are the kind of people you want in your corner, when disaster looms, although not so much the wimp, Christopher, now married to Chrissie, but somewhat involved in Daisy’s life.  Still a wuss, afraid to come out of the closet and tackle the difficult things in life.

The Darlington-Browns hear of the incident via their Whatsapp group and learn that Rosie is in a coma and the doctors don’t know if she’ll recover. Immediately prayers and images of clasped hands and angels, go out on Facebook and Instagram sending good wishes to Rosie.

But accusations fly thick and fast although no-one seems to have any proof that Daisy dunnit, even though there is a witness, Isaiah, the school’s groundsman, who apparently overheard the two girls arguing.

Earlier Lilah was called to the school because Daisy was seen smoking and drinking at the “leavers’” party, again reported by a faceless person. The Rosie incident is the stuff of nightmares for Lilah and her friends who rally to her support as Daisy faces suspension and a hearing.

There are anonymous diary entries which add to the tension and make you think that Daisy did do it.  Even her mother has her misgivings.

Sparks fly when Lilah gets involved with Sam Jones, one of her clients, who lost his confidence to speak in public after the Marikana incident. Cass and Henry also give Lilah some advice on how to prepare for her first proper date with Sam, which will make you chuckle, a lot. It comes as a complete surprise when the chairman of the school’s disciplinary council is Sam Jones, making matters more complicated. There are also a few more shocks in store for Lilah, and not a few red herrings. Even though Lilah hires a PI to investigate what happened on the balcony, she’s the one who finally nets the culprit. To give away more of the plot would be a spoiler.

With a few well-chosen words Power draws powerful pictures of all the characters that feature in Delilah Now Trending and include the headmistress, Ida Stewart; a teacher Ms Bamford;  Daisy’s boyfriend Jack, 12, who, when Lilah saw them Skyping, thought he was a 40-year-old man, and even the police who appear briefly  to question the family about the Rosie affair, are fully fleshed out.

Delilah Now Trending should be bookmarked as a must-read. It will grab your attention from page 1. A word of caution, though, there is nothing politically correct about this intriguing novel and if the F-word upsets you or sex scenes make you blush, then give it a miss. But if you do you’ll regret it. It’s a novel that will keep book club members talking and talking over their tea and biscuits or G&Ts. Power has cleverly nailed the insidiousness of social media, Twitter, FaceBook, Instagram and the cyber-bullying that goes with it.  Bullying generally is a problem at many schools and here again Power has honed in on this issue, showing what can happen to the victim and the bully.