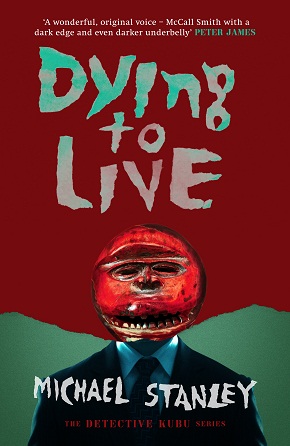 Dying To Live is the sixth thriller featuring Detective David “Kubu” (Hippo) Bengu, for obvious reasons. Bengu is the Assistant Superintendent in the Botswana Criminal Investigation Department (CID) and during his career he has solved many cases, but none of them has been as daunting as this one. It has all the ingredients of a top-class thriller: muti, witchdoctors, rhino horn smuggling, biopiracy and a dead Bushman who looks ancient but has the organs of a much younger man.

The body of the Bushman, known only Heiseb, is found by an inept Ghanzi policeman, Detective Sergeant Barwe Segodi, who dismisses the man’s death as an accident, because he wants to close the file as soon as possible. There are two sets of tracks and Christopher Collins, an American researcher from the University of Minnesota, who was trying to find out the secret to Heiseb’s longevity, has also disappeared like a cloud of Kalahari dust.  However, a young and keen constable, Ixau, based in New iXade spots some discrepancies and when the body is transported to Gaborone, the case is brought to Bengu’s attention by police pathologist, Ian McGregor. Then a witch doctor. Botlele Ramala disappears and Heiseb’s body is stolen from the morgue.

Bengu persuades his acerbic director Jacob Mabaku, to allow him to take on the case and the “Hippo” who is on a strict diet, courtesy his wife, Joyce, enlists the aid of Samantha Khama, the first female detective in the Botswana police and a rising star.

Many interesting characters emerge from the woodwork: Jonah Gampone, the owner of an export-import business in Gaborone who is apparently working undercover for CITES; private detective Festus Moeng and some Chinese from the embassy. And a Professor of Anthropology at the University of Botswana, Thabo Sichle, who is not that kosher himself.

Apart from the case, Bengu is also concerned about his adopted daughter Nono, who has HIV and has suddenly taken a turn for the worse. And Joyce persuades him to get some of the muti that enabled Heiseb to live such a long life.  There are numerous red herrings but eventually Bengu and Khama get to the bottom of it. Despite the grisly subject Dying To Live is a gently written thriller about greed and police procedure that will keep you guessing to the last page when Bengu finally confronts the perpetrator, and which leaves the detective with a moral dilemma.

Although this is part of a series it can be read as a standalone. However, I suggest you read the other five books to get the bigger picture. You’ll soon become a fan of David “Kubu” Bengu created by the writing partnership of Michael Sears and Stanley Trollip.