Let’s face it, cycling is a fun yet dangerous sport if you don’t use the right tools. More likely than not, we’ve all felt the pain of falling off our bicycle when our feet can’t kick away fast enough. 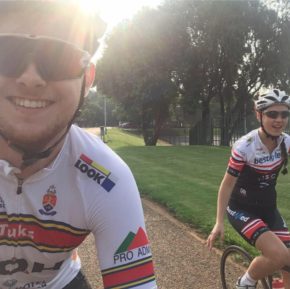 Hennie Terblanche, a sport enthusiast, was one them. Terblanche suffered a broken neck, but five years later, he has developed and introduced a brand new set of cycling pedals; a revolutionary product which allows for quick release to keep you safer and allows you to take control of your movement.

Footloose Pedals makes cycling safer for professional and recreational cyclists who love mountain and road mountain biking. These pedals are endorsed by many professional cyclists in biking and cross-country disciplines, including Marinus van Sandwyk and Sabrina van Wyk.

According to Marinus van Sandwyk, who did a thorough test of the product at the Van Gaalens National Series MTB Race over a distance of 40 km – including rocky climbs and descents – the pedals are “a very unique and interesting concept.”

“The pedals are very stiff on flat ground and good upstroke can be achieved, as well as a decent power output when used,” Van Sandwyk says.

Sabrina van Wyk, who also has a long history of mountain biking, did a short basic test. According to Sabrina, “I immediately saw that the upstroke on flats is really good.” She praised the concept and recommends them for beginners and hobbyists too.

Sabrina also mentioned that it’s much safer and easier to use than traditional pedals.

Nicky Botha, a recreational cyclist from Port Elizabeth, praised the product on social media, calling Footloose Pedals a miracle. “I fell so many times with traditional pedals when I started riding again!” she says. She had no hassles using Footloose Pedals, as they are easy to put on the bicycle and to incorporate into the riding routine.