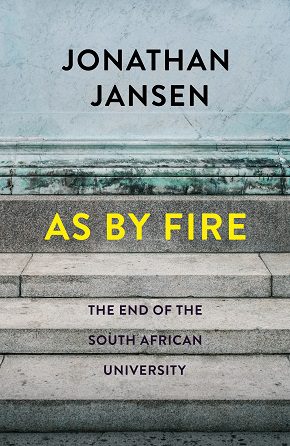 Well-known educationist Professor Jonathan Jansen, the former Rector of the University of the Free State, is not afraid to make his views known, vociferously, when necessary. And he doesn’t mince his words in As If By Fire, a first-hand view of the #Feesmustfall movement.

Jansen interviewed 11 vice-chancellors of the universities involved. The book includes his own commentary as well. However, his assessment leaves one without hope for the future of these institutions.

University students and those at other tertiary institutions, ran riot last year, burning buildings, assaulting bystanders and in one incident, a security guard, hoping the authorities would heed their call for free education.

The nationwide protest was spurred by a middle-aged, and apparently permanent UCT student, Maxwell Chumani, when he threw excrement over the Cecil John  Rhodes statue on campus, which gave birth to the #Rhodesmustfall movement.

(As far as I can recall no reporter ever asked Chumani about his university career or how he was able to afford the fees. Chumani, who is reportedly a Zimbabwean, was arrested after he gave the finger to a blue light brigade escorting President Jacob Zuma from Tuynhuis. Chumani was thrown into the back of a police van and later sued for wrongful arrest. He won his case and was awarded damages. Perhaps he was using that money).

In some newspapers, especially those in the Independent stable, he was treated as a hero, and Dr Max Price, vice-chancellor of UCT, refers to it in his interview with Jansen.

Price, in the interview, said he believed that Iqbal Surve, the owner of Independent Media, sent a message to the Cape Times, especially, and the Cape Argus, to “present stories in a way that would discredit UCT management”.

It appears that Surve has a personal grudge against Price and the truth may emerge if the Independent boss’s threat to sue Price, which he said he would do when the book was published, becomes a reality.

The violence that accompanied the protests took the ANC by surprise, but not the 11 vice-chancellors including Jansen.

The vice-chancellors said they “had been trying to warn the government for a decade that the perfect storm was brewing”. Adam Habib, the VC of Wits, for example, pointed out that the driver of the crisis was the declining state subsidy , and universities had to compensate by increasing fees so putting university education beyond the reach of many students. Some other points As By Fire makes is that the #Feesmustfall movement was largely leaderless; that the “vexed” demand for decolonisation and the “welfarism” of universities, among others, muddied the waters.

Decolonisation has many meanings and because the “critique of post-colonialism is embedded in impenetrable and unnecessary obscure language many of us are left out of the debate”.

The opinions of the vice-chancellors are spread throughout the 10 chapters of the book which attempts to answer three important questions: What in fact happened?; Why did it happen?; What does the protest crisis mean for the future of South African universities?

The answers are diverse as the universities themselves but there are common threads: students’ expectations and the promises made at the birth of the Rainbow Nation which were not kept. The other commonalities that run through the narrative are that “every year universities receive less state subsidies in real terms than ever before and that free university education for all is not feasible.

Jansen, especially, says that government interference in university affairs, is also to blame for the crisis.
So, Jansen, asks, “How does the movie end?”.

Well, in short, badly. “It is unlikely that the stand-off over free higher education will be resolved through a political settlement between the ruling and the warring opposition, or through fiscal redemption whereby the government miraculously conjures up the money required on a sustainable basis.”

However, he says there is one remaining glimmer of hope. “When ending Apartheid looked impossible, ordinary people rose up against the might of the white nationalist state and brought a terrorising power to its knees”. To paraphrase Jansen: the institutions are called public universities. “They belong to all of us, the ordinary citizens of South Africa. Which means everyone must come together on two principles: the right to free higher education for the poor, and the right to education for everyone.”

I think Jansen is living in Lotus Land when he asserts, “that government can and should instantly provide fully funded education through grants for poor, first degree generation students without an obligation to pay so that these graduates can contribute to lifting their families out of poverty without the burden of debt.”
Jansen has given the people who were really under fire, the vice-chancellors, a voice. Something the media should have done. That would have a gone long way in helping us to understand a complex and vexing situation.

Philip Graham, the publisher of the Washington Post, in the 60s, pointed out that it was a journalist’s job to write a “first rough draft of history”. That’s what Jansen has done and his “first draft of history” makes for compelling reading.