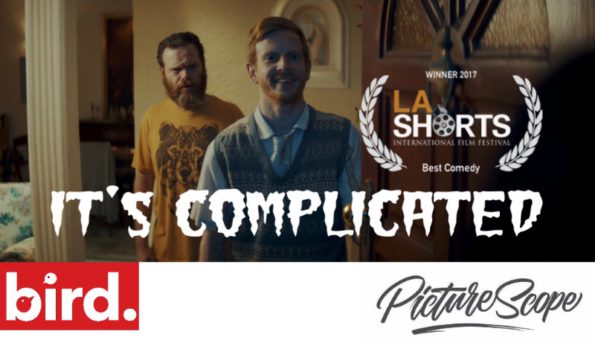 Among the competition the South African effort faced were works from industry names the likes of Robin Wright (House of Cards), Matthew Modine (Stranger Things), John Stamos (Full House) and Michael Flatley (Lord of the Dance).

The festival is accredited by the Academy of Motion Picture Arts and Sciences and award winners are eligible for Academy nomination. LA Shorts is also an official qualifying event for the British Academy of Film and Television Arts (BAFTA) short film awards and the Academy of Canadian Cinema and Television (ACCT) presenters of the Canadian Screen Awards – eligible international film festivals.

LA Shorts Fest is the only film festival with seven award categories recognised by the Academy Awards. It reported this year that a total of 44 LA Shorts Fest winners have progressed through to become Academy Award nominees, with 14 filmmakers taking home an Oscar.

IT’S COMPLICATED is a cross-genre film, billed as a romantic comedy horror. It tells the story of lonely Andy who invites a girl he met online to his apartment. He then falls head-over-heels for her despite his stoner flatmate Nigel’s repeated attempts to point out her seemingly obvious flaw.

Grant De Sousa said ” I set out to create a film on an international standard that happens to be set in S.A. using only South African cast. We wanted the film to compete on the international stage. The original idea was to explore amusing human truths explored in the medium of a genre film.” Grant went onto explain the challenges of the Genre. “I felt that dark comedies are such a rare pursuit in the foreign film marketplace and probably with good reason. Tonally it was a huge challenge for me and one I could not have achieved without such strong dynamic performances from a stellar cast!”

The film was independently financed by the producers and shot entirely in Cape Town over a 3 day period. It stars Paul Snodgrass, Johann Vermaak, Lise Slabber and Sean Cameron Michael.

IT’S COMPLICATED will have its South African premiere at the 15th edition of the shnit Worldwide Short Film Festival in Cape Town from October 18th to 29th 2017.

Music: The Hellcats and Woodstock Mafia